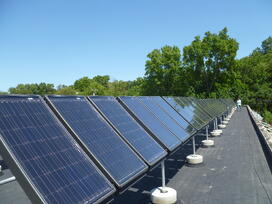 Last year we saw battles over net metering play out in Idaho and Arizona  (it was even one of our Top 10 Stories of 2013). This week a familiar story surfaced in Kansas: utilities are lobbying for lower net metering reimbursement for solar customers. Kansas utility Westar Energy’s executive director of government affairs argued that the utility is paying solar customers “a retail price for a wholesale commodity.”

Mark Moser, the inventor and entrepreneur behind the Konza Solar Tracker, told the Topeka Capital-Journal that changes to the net-metering policy would price him out of the Kansas market. “I would be left with few options,” Moser said. “As the proverbial solar tracking mustard seed, the Konza Solar Tracker will have to find more fertile ground to grow in elsewhere.”

Meanwhile, the Arizona Corporation Commission (the state’s public utility commission) is considering a proposal to waive or eliminate the state’s rooftop-solar mandate. This is not the first time solar has come under fire in Arizona; as mentioned above, net metering was a hotly contested issue in one of America’s sunniest states late last year, ending with the commission imposing a small monthly charge on rooftop solar owners.

This time around, the Arizona Daily Star reports, at issue is whether utilities should be able to count consumer-owned PV installations toward meeting the state renewable portfolio standard (RPS). Without the credits from the solar customers, Tucson Electric Power claims they will be unable to meet the standards. The Commission ended the rooftop solar inclusion, because, as spokesman Joe Barrios said, it “did what it was supposed to do. It fostered the industry and encouraged the adoption of renewable energy.”

In the world of energy finance, Goldman Sachs announced a commitment of $40 billion of global investment in wind and solar projects, including a $500 million investment in AEE member company SolarCity. “Goldman Sachs finds this market incredibly compelling,” said Stuart Bernstein, head of Goldman Sachs clean technology and renewables investment banking group. “It is at a transformational moment in time.” Bernstein also said the bank “is taking a decades-long view” and that Goldman Sachs predicts that renewable energy will be an important piece of the global economy. Last year, AEE found that advanced energy is already a major component of global GDP, with more than $1 trillion in global revenue in 2011. Download the report by clicking below.

Meanwhile, Tesla Motors completed something that would have been impossible mere months ago: a cross-country road trip! Using only company-installed Superchargers for power, the team of 15 drivers and two Tesla Model S sedans covered the 3,400 miles from Los Angeles to New York City in just under 77 hours. Go Tesla!