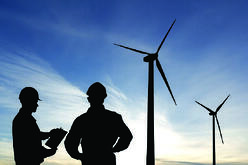 Facebook announced this week that its new Altoona, IA, data center would be operating entirely on wind energy. The data center, which will be operational in 2015, will get its energy from a wind project in Wellsburg, IA. The Des Moines Register reports that the new data center will bring close to $1 billion to the region over six years.

“When we settled on Altoona as the location for our fourth data center, one of the deciding factors was the opportunity to help develop a new wind project in the state,” Vincent Van Son, Facebook’s data center energy manager said. “The project brings additional investment and jobs to the region, and in effect it makes it possible, on an annualized basis, for 100 percent of our energy needs to be met entirely with one of Iowa’s most abundant renewable resources.”

Initially, Iowa might seem a strange choice for a California-based company’s data center. But Facebook is joining other tech giants like Microsoft and Google in building energy efficient data centers in areas rich in advanced energy resources. Last week we reported on Microsoft’s wind energy purchase agreement with RES Americas to power a data center in Texas, and this week Google announced an investment to build six new U.S. solar power plants, in partnership with private equity firm KKR & Co.

Google and KKR plan to invest about $400 million in the six new facilities, which will be built by AEE member company Recurrent Energy. The five California facilities and one Arizona project are expected to have total generating capacity of 106 MW. Recurrent Energy will continue to operate the plants, and has power purchase agreements in place with several buyers.

This is not the first time Google and KKR have partnered with Recurrent Energy to develop solar projects. In May 2012, four central-California solar plants with a combined capacity of 88 MW began delivering electricity to the Sacramento Municipal Utility District.

Meanwhile, regulators in Arizona held hearings on net metering this week, a policy by which consumers can sell back excess electricity from their rooftop solar systems to the utility. Net metering rules, which vary from state-to-state, are becoming a hotly contested issue for Public Utility Commissions everywhere. Arizona Public Service (APS), Arizona’s largest utility, advocated for changes to net metering policy as it currently stands, saying that the current policies place an unfair burden on non-solar consumers. Solar companies and advocates say the current policies allow consumers the freedom to choose their energy source.

Ultimately, the commission voted 3-2 in favor of a compromise proposed by some solar industry advocates and the Arizona Residential Utility Consumer Office. Arizona net metering customers will pay a fee of $0.70 for each kilowatt of solar-system capacity a customer owns, which, according to the Arizona Daily Star, is calculated to be about $5 for a typical 7 kilowatt home system.

To keep up to date with all the developments in advanced energy policies and markets, sign up for AEE Weekly by clicking the button below.