Toward a New Power Platform: Why We Can Move Quickly 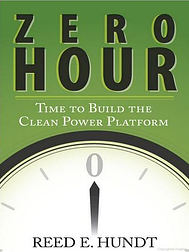 This is the second of five blog posts adapted from the new book “Zero Hour: Time to Build the Clean Power Platform,” by Reed E. Hundt, former chairman of the Federal Communications Commission and Board Member of the Advanced Energy Economy Institute. Read all the posts here. Buy the book: Amazon | Google | Kobo | Barnes and Noble | EbookMall

A transition to the new power platform can happen quickly and easily, with the benefit of technology changes already under way and fearless application of the right policy tools. The key is to deprive the old power platform of its price advantages (which are unearned, the result of past policies that turned them into the incumbents they are today) and make new, better energy choices irresistible to consumers.

Scientists can prove that solar and wind power will sustain the global economy, and that natural gas, hydropower and nuclear power also can compose a sustainable power platform. However, science does not persuade everyone. Vested interests in the old power platform can mount public attacks on the doubts that science, by definition, concedes with respect to all hypotheses and causal explanations. These same interests richly support politicians who gleefully mock science.

However, science defeats all naysayers when its insights are translated into technological solutions that consumers find delightful. When capitalism opens pocket books it tends to open minds to new beliefs as well. Businesses can always find ways to make money when costs are dropping, and particularly in the last several years, the energy sector has seen many technologically driven declines in cost.

Solar panel costs have plummeted. A suite of technological advances has led to natural gas discoveries in many continents. Massive supply increases in the United States have lowered the cost of gas below coal for the first time in history. Battery inventions will make hybrid gas-electric plug-ins price competitive with internal combustion gasoline-driven cars within five years. Among many inventions in building materials that will lower residential consumption costs by reducing the amount of energy needed for heating, lighting, and air-conditioning, perhaps most fascinating are smart windows that computers can instruct to let light and heat in or out, as desired.

Turbine design breakthroughs have lowered the cost, and increased the efficiency, of wind installations. With transmission interconnections to wind’s locations, this renewable resource can provide 20 percent of the national electricity demand, if not more. With lower cost financing added to the capital mix for wind projects, the volume of such projects can be doubled or even tripled. Most important, instead of wind being suitable economically in only some states, perhaps a dozen or so, with low cost financing it can produce electricity at rates as low as otherwise prevail in perhaps two dozen states or more.

Many of the breakthroughs in energy solutions will be realized off the grid, behind the meter, in distributed generation and consumption. Utilities and distributed electrical generation sources – rooftop solar, small wind turbines, small hydro – will use software to manage second-to-second all available watts. Excess power will be stored, and sold back to the grid as demand requires. This distributed computer-managed generation platform could be an open system. Then new hardware and software applications, such as home thermostats, lighting advances, and electricity generating windows, will easily slide in next to existing technologies.

In a report prepared for the electric utility trade association, the Edison Electric Institute, Peter Kind notes that at today’s costs, distributed solar (panels on rooftops) can increase its share of the generation market from less than 1 percent to 16 percent in states where rates are at or above 15 cents per kilowatt hour. Another study estimates the total addressable market for distributed solar can be 20 million homes, as compared to the far less than 1 million currently getting electricity from rooftop panels.

The rate of expansion of distributed solar will vary from one state to another, depending on regulatory policy and exposure to the sun. Under cash grant subsidies currently in place in many states, distributed solar is already cheaper than grid-supplied electricity. But even if states provided lower-cost financing instead of cash grants for solar power, installed costs appear likely to drop far enough to permit distributed solar to take away from the utility’s grid-based supply anywhere between one-quarter and one-half of residential electricity demand. This major inflection point could be reached in only a few years.

Efficiency gains can also lead to an inflection point where the shift to the new power platform becomes inevitable. Americans consume about double the amount of energy every day (250 kilowatt hours) than Europeans and Japanese do. Given this extravagant energy intensity (the measure of the amount of energy needed to produce goods or services), businesses and residences can save much money by adopting consumption and temperature management measures that save money and enhance the quality of occupancy.

As a result of these steps toward the new power platform, greenhouse gas emissions in many developed countries have begun to drop. Emissions in the United States have decreased since 2005. Germany took a major step toward the new power platform after re-unification by closing inefficient coal-fired power plants in the former East Germany. Subsequently, Germany provided a government guaranteed price (a feed-in tariff) for electricity generated by renewables, thus pulling a greater share of renewable electricity into the market. In the wake of the Fukushima disaster in 2011, Germany accelerated the phase out of nuclear energy, thus creating even more demand for new energy sources. Meanwhile, the United Kingdom substituted natural gas for coal over the last two decades after privatizing its electric industry.

One mechanism – the European cap-and-trade system – has had mixed results. Permit prices were intended to rise gradually, encouraging firms to move to clean electricity. Instead they have fallen by 90% since 2008, both because permit supply increased and because reduced economic activity led to reduced demand for permits.

The European experience with cap and trade demonstrates that government needs to keep permit prices high enough to force consumers to switch to clean energy. Governments are likely to show this resolve only if the new power platform delivers electricity at the same price that consumers would otherwise be paying. Europe may have taught that a perfectly logical plan like cap and trade is inferior to mobilizing consumer demand for the new power platform by lowering energy bills.

The United States came closest to following suit in the Waxman-Markey bill of 2009. Passing the House before stalling in the Senate, Waxman-Markey contained three methods for moving toward the new power platform: a cap-and-trade system for emissions permits, low-cost “green bank” project financing (called the Clean Energy Development Authority in the bill), and a renewable energy requirement for utilities.

Although the Waxman-Markey bill did not become law, its three ways of creating clean-for-coal substitution can be adopted at the state and regional level. Each of the regional grids can adopt a cap and trade system, as states in the Northeast have done for power generation and California is doing economy-wide. Any state can create a green bank, as Connecticut has done and New York and other states are doing. Renewable portfolio standards already exist in 29 states and the District of Columbia, which in turn account for about two-thirds of retail electricity sales.

Nor is the federal government powerless to push America onto the new power platform. The President commands an executive branch charged with ample authority under existing law to accelerate the clean-for-carbon switch in the electrical generation fleet.

On June 25, President Obama directed EPA “to complete new CO2 pollution standards for both new and existing power plants.” Moving beyond limiting mercury to constraining carbon dioxide emissions, EPA is supposed to propose new standards for existing power plants by June 2014, and finalize them in a rule by June 2015. States are to finish their implementation plans by June 2016. To comply with the EPA rules, many of the new, cleaner generation sources will be natural gas in the form of combined cycle gas turbines (CCGT) and renewables. At least 20% of the power sector’s carbon dioxide emissions can be reduced very quickly by doubling the existing CCGT output from 2011 levels.

However, the EPA must act with dispatch and resolve if it is to deliver the necessary regulation before the President’s second term ends. As FCC chairman on the eve of passage of the 1996 Telecommunications Act, I asked Congress to put in the law short deadlines for completing the dozens of rulemakings Congress ordered. I wanted to force all stakeholders to make up their minds quickly on the myriad issues, and to deter the incumbents from conducting a campaign of delay.

The EPA rule will decide, in effect, who pays for the move to the new power platform, how much will be paid, and how fast the move should take place. To expedite the move, taxpayers ought to fund the up-front costs. In any event, consumers should not be the principal payers. Instead, cheaper, cleaner energy solutions should make consumers the biggest advocates for a rapid shift to the new power platform.

Coming next: Consumers Need to Demand the New Power Platform