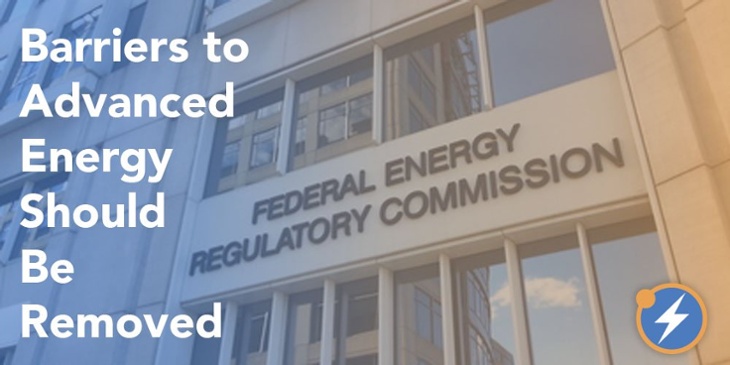 Two-thirds of the nation’s wholesale electricity sales occur in a competitive market managed by a Regional Transmission Organization (RTO) or Independent System Operator (ISO), with over 200 million customers in these areas and over $120 billion in annual energy transactions taking place. Under the Federal Power Act, these markets are overseen by the Federal Energy Regulatory Commission (FERC), which ultimately determines the rules for how wholesale electricity is bought and sold in the marketplace. RTOs/ISOs develop the market rules that dictate whether and how energy resources can participate and compete. Wholesale electricity markets should allow all resources to compete on price and performance, as the Federal Power Act requires that the rates, terms, and conditions of service governing wholesale competitive markets be “just and reasonable” and not grant any “undue preference or advantage.” Many market rules, however, are outdated, having been designed with older technologies in mind. Those rules can favor incumbent technologies and disadvantage newer and more innovative energy options – that is, advanced energy.

In the 1990s. A number of states “deregulated” – more accurately, restructured – their electric power systems by requiring monopoly utilities to sell off their power plants and letting them maintain their exclusive franchise only for the delivery of electricity (i.e., managing the poles and wires that connect to homes and businesses). Thereafter, owners of existing power plants and developers of new ones would compete in open markets to deliver electricity at the lowest price.

The federal government, through FERC, organized these wholesale electricity markets at the regional level, establishing nonprofit entities called Regional Transmission Organizations, or RTOs, to manage a power grid fed by competing power plants. Private investors would build and operate power plants, and competition between these independent power producers would drive down costs, increase efficiency, and spur innovation. Competition would also free ratepayers from the risk that power plants built by their regulated utility would become outmoded and inefficient, shifting that risk to private investors.

These competitive wholesale electricity markets have worked. The RTO serving the Midwest – the Midcontinent Independent System Operator – estimates the region has realized $12.2 billion to $16.8 billion in cumulative savings from 2007 to 2015. A study from the University of Chicago found organized power markets save about $3 billion annually in generation costs. These markets have helped spur innovation by sending price signals to invest in new, competitive resources. But even these markets are not as competitive as they could be, and consumers are losing out as a result.

Today, the advanced energy  industry offers numerous innovative technologies to meet our energy needs across the country. Altogether, these technologies have generated $238 billion in annual revenue and supported 3.5 million jobs in the United States. Some advanced energy resources – including demand response, energy efficiency, and renewable energy – have gained increasing market share in competitive wholesale markets, while other technologies, including storage and other distributed energy resources, look to break into these markets.

New market rules that allow these technologies to fully participate would result in gigawatts of energy and billions in dollars of investment, and would facilitate the retirement of older, less efficient, and higher polluting resources. But advanced energy encounters regulatory barriers that prevent its technologies and services from competing in the wholesale electricity marketplace. Removing these barriers would be steps toward expanding advanced energy market opportunity by $65 billion, according to Advanced Energy Economy (AEE) estimates.

AEE has explored these barriers in depth in Wholesale Market Barriers to Advanced Energy — and How to Remove Them. But to help policymakers and the public understand how the barriers created by market rules stand in the way of advanced energy technologies, AEE has begun to develop a series of two-page market briefs that provide clear and concise information on these markets and the way they affect advanced energy technologies and the companies that provide them.

The first brief in the series, “Needed: A Level Playing Field in Wholesale Electricity Markets,” explains how the markets governed by FERC operate and why allowing all resources to compete on a technology-neutral basis will benefit consumers and the grid. The brief identifies three common barriers that generally stand in the way of all resources competing on price and performance:

The brief also cites recent steps by FERC to create a level playing field in these markets, such as removing market barriers for energy storage in Order 841, proposing to remove barriers for aggregated distributed energy resources, rejecting a proposal to bail out “fuel-secure” power plants, and preventing regional markets from disallowing the participation of energy efficiency resources (EERs).

The second brief, “Market Barriers Prevent Advanced Energy from Competing,” notes the industry’s progress in growing around the country and that advanced energy is now the lowest-cost resources in many markets, but that rules in some markets stand in the way of these technologies. Specifically:

This brief also gives three examples of market barriers being removed and points to the way one remaining barrier could quickly be taken down: FERC taking action to finalize a rulemaking begun nearly three years ago, in November 2016, to accommodate the participation of aggregated DER in the wholesale markets under its jurisdiction.

Since 2016, AEE has worked on expanding wholesale markets to help accelerate the growth of advanced energy with technology-neutral markets where all resources can compete based on price and performance. Experience shows that advanced energy technologies can compete with traditional resources and can change the power grid for the better – if they are allowed to compete. Our market briefs explain the opportunities and challenges for advanced energy resources in wholesale markets. The first two briefs, along with additional ones that will be released in the coming months, will be available by clicking below.