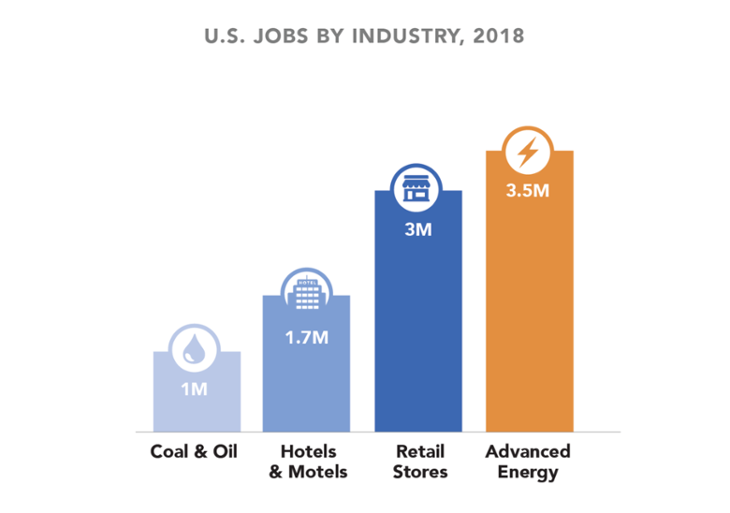 The advanced energy industry employed just over 3.5 million U.S. workers in 2018, an increase of 125,000 jobs over 2017. Advanced energy employment grew 4% last year, more than twice as fast as overall U.S. employment growth, at 1.5%. And the growth continues: Employers expect to add 6% more advanced energy jobs in the coming year. These are some of the findings derived from the 2019 U.S. Energy and Employment Report (USEER), produced by the Energy Futures Initiative (EFI) in partnership with the National Association of State Energy Officials (NASEO), using data collected and analyzed by BW Research Partnership. Want more proof that advanced energy is a major source of employment? Comparison to other significant U.S. industries might help.At 3.5 million jobs, advanced energy employs more U.S. workers than retail stores (3 million), twice as many as hotels and motels (1.7 million), and more than three times as many as the coal and oil industries combined (1 million), according to the Bureau of Labor Statistics (retail and hotel/motel) and USEER (coal and oil).

“Advanced energy is a significant growth industry,” commented AEE CEO Nat Kreamer, on AEE’s release of a fact sheet illustrating these findings. “From energy efficiency to electric vehicles, the technologies and services that constitute advanced energy are creating jobs and helping the U.S. economy expand. At AEE, we are working to promote state and federal policies that remove barriers and expand markets. As long as advanced energy products are allowed to compete on performance and price, we can keep this economic driver going.”

In terms of diversity, the picture is more mixed: Latinos make up 20% of the advanced energy workforce (up from 18% from a year ago), slightly higher than the U.S. average of 17%. African Americans account for 8%, well below the U.S. average of 12%, while Asian Americans make up 9%, compared with 6% of all U.S. jobs. Some 10% of advanced energy workers are veterans of the military, compared with 6% of all U.S. workers, and 7% are union members, compared with 11% of U.S. workers overall.

As noted, advanced energy employment is predicted to grow 6% overall in 2019, but that growth will vary: Employers expect to add energy efficiency jobs at an 8% rate this year; the same 8% growth is expected in solar jobs, which shrank last year. Wind jobs are expected to grow another 5% this year, and battery storage jobs 4%. All of these growth rates far exceed actual U.S. employment growth of 1.5% last year, and will likely outpace overall job growth this year

Jobs are not the only way the advanced energy industry is growing. Stay tuned for the 2019 edition of our Advanced Energy Now Market Report, with U.S. and global revenue from 2011 to 2018 and key trends driving advanced energy growth, coming soon. Our 2017 edition showed advanced energy to be a $1.4 trillion global industry, generating $200 billion in revenue in the United States. For now, take in the reality of advanced energy as a job machine.