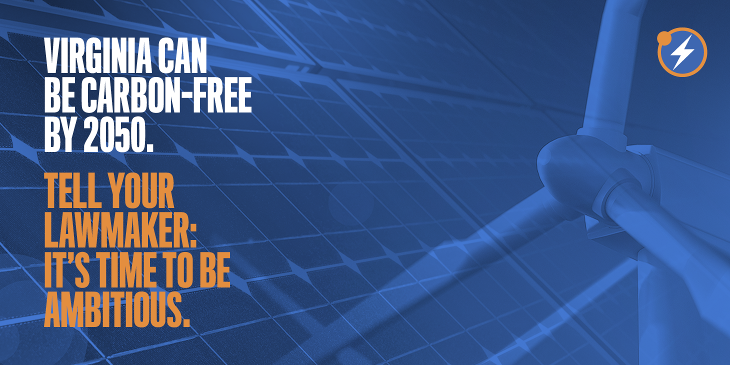 In September, Virginia Gov. Ralph Northam made a splash when he issued Executive Order 43, charting a path toward 100% carbon-free electricity by 2050 for the Commonwealth. It is no secret that, in order to fulfill a mandate like this, the Commonwealth’s energy sector needs to change in ways big and small. The Virginia Clean Economy Act (VCEA) provides a path for Virginia to achieve that change, while saving money, creating jobs, and boosting the economy along the way.

The VCEA represents the most ambitious energy proposal in Virginia’s history. It consists of four key components:

The passage of the VCEA will be instrumental in making sure that Gov. Northam’s vision of a 100% clean energy Virginia can actually come to fruition. In doing so, it will help to stimulate investment in clean energy technologies and generate thousands of jobs while making the electricity Virginia’s consume more affordable, more reliable, and cleaner.

This legislation, which is currently supported by more than 30 organizations and businesses, was developed with two goals in mind: getting Virginia to 100% carbon-free energy by mid-century and protecting consumers from paying more on their utility bills. To inform the conversation around Virginia’s transition to an advanced energy economy, AEE released “Virginia’s Energy Transition,” a report that utilizes advanced modeling to project how this energy transition will impact the Commonwealth’s economy.

The report shows that transitioning to a zero-carbon future does not have to be a burden on Virginia consumers. If done correctly, such a transition can lower electricity bills, create jobs, and improve public health. The Virginia Clean Economy Act is crafted to achieve just that.

On average, the zero-carbon scenarios that were examined in the report showed that job creation under those scenarios exceeds business as usual by an average of 7,000 to 13,000 jobs per year. The zero-carbon scenarios offer total economic benefits ranging from $80 billion to $106 billion over the next 30 years, and net benefits ranging from $13.6 billion to $80 billion. In the scenario most closely aligned to VCEA, Virginians would realize bill savings every year through 2050, with average households saving a total of $2,500 to $3,500 over the 30-year period.

How does the VCEA help drive Virginia toward such a positive future?

First, the VCEA prioritizes energy efficiency investments. It’s simple – the cleanest and cheapest energy is the energy a family or business doesn’t need to use. By prioritizing energy efficiency prior to investing in new utility-scale generating capacity we increase energy productivity, ensuring a family has the same level of comfort in their home at a lower cost or a business is able to produce more of its products while using less energy.

Next, the legislation empowers Virginians to have more control over their energy decisions by removing burdensome regulations that currently block many of these investments. The legislation will allow local governments to go solar by signing power purchase agreements with local solar providers (more Virginia jobs), it will end utility fees that punish homeowners for going solar instead of recognizing the value solar brings to the electric grid, and it will pave the way for shared solar programs that allow Virginians who don’t own a home to go solar.

Just as importantly, the legislation has two complementary policies – a Renewable Portfolio Standard and carbon regulations. Together, these twin policies will ensure that, by the middle of this century, Virginia will not burn any fossil fuels and will meet its energy with non-polluting sources. The legislation will take a stepped approach, ensuring that clean energy is brought to scale at a pace that doesn’t break the bank; 58% of the electric system would be powered by clean energy in 2030, 73% by 2035, 88% by 2040, and 100% by 2050.

Virginia can ring in the new decade by taking bold action to move toward an energy system powered by 100% clean energy. Doing so would be a win for Virginia’s economy, consumers, and environment. For more information on the legislative package, our supporters, and to stay up-to-date on how you can get involved, click below.