States are Getting Charged Up about Electric Vehicles 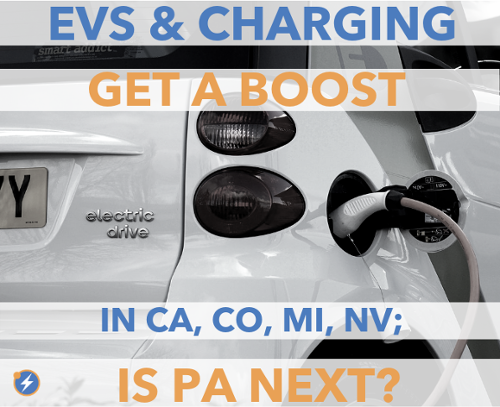 It has been an action packed few months in transportation electrification as legislative sessions have been in full swing. We have seen some good, some bad, and some ugly, but ultimately, as sessions start to wind down, the electric vehicle (EV) industry is walking away with some major wins. In Michigan, we saw a major charging infrastructure program approved. In Colorado, new legislation removed barriers to EV charging station deployment and extended tax credits for EV purchases. Down in the southwest, Nevada’s legislature has passed bills that incentivize the adoption of electric school buses by school districts and ease weight restrictions on heavy-duty electric vehicles. Next door in California, we got assurance that a new rulemaking is not going to hold up utility requests for approval of EV infrastructure plans. Meanwhile, a bill introduced in Pennsylvania is making that state look like the next one that could become EV friendly. These actions are all part of an accelerating trend toward vehicle electrification in states across the country.

Combined with the Commission’s approval earlier this year of Consumers Energy’s $10M EV program, we have now seen $23M in EV support approved in Michigan this year. That is a marked contrast from just a few years ago, when Consumers Energy had to withdraw an earlier EV program, and it is a credit to the efforts of many organizations, including the MPSC, our partners at the Michigan Energy Innovation Business Council (MiEBC), a number of environmental groups, many companies, utilities, ratepayer advocates, and other state agencies. Looking ahead, these groups are looking to build on this momentum in working with a new administration that is determined to keep this auto state ahead of the curve.

The 2019 legislative session in Colorado was certainly one for the books. With a newly elected governor who is explicitly pro-advanced energy, it was no surprise to see a number of bills focused on transportation electrification. Two of the key bills that we had our sights set on were SB077 and HB1159.

SB077 removes long standing regulatory barriers that limit charging infrastructure in the state, directs utilities to develop transportation electrification programs that are consistent with IRP plans, and guides Commission review of those program proposals. Its passage marked a big turn of events in the state, as earlier versions had failed to emerge from committee for the past two years. This year, coming out of our Gubernatorial Engagement efforts in the state, local advocates asked our team to engage for the first time, complementing the work of an active coalition on the ground. The bill was the subject of conference committee negotiations and considerable debate, but has now been passed by both chambers of the Colorado General Assembly and is on Gov. Polis’s desk for signature.

Stuck in Committee while the legislature worked on the budget, HB1159, ultimately passed both the Senate and the House and is now on its way to the Governor as well. The bill provides a critical extension and restructuring of the state’s income tax credit incentive on the purchase or lease of an electric vehicle or plug-in hybrid to 2026.

These bills arrive on top of the Governor’s decision to refocus VW settlement funds on electrification, the Public Utility Commission’s recently concluded transportation electrification docket, several other pieces of new legislation that passed this session, and some other regulatory developments that are underway. We are excited to see what’s next in this forward moving, energy-focused state.

Just yesterday, the Nevada Assembly passed SB299 by a 39-1 margin and sent it on to Gov. Sisolak for signature. The bill provides an incentive of 75% of the cost for school districts to develop charging infrastructure or purchase school buses. It also establishes a program by which a utility can own the battery of a bus while a school district owns the rest of the vehicle. As SB299 was passing, Gov. Sisolak signed another piece of EV-related legislation, AB377, which provides a weight exemption for heavy-duty EVs, allowing them the same access to the roads as to compete fairly with other heavy-duty trucksvehicles. We are thrilled to see these developments, as you can see in this local news report, and look forward to seeing more electric buses and trucks on Nevada roads soon.

Moving West, in early December, the California Public Utilities Commission (CPUC) proposed an order that would create a new rulemaking intended to allow the CPUC to develop a strategy for transportation electrification. Unfortunately, the proposal contained language that created uncertainty about utility proposals for infrastructure investment during the multi-year period of strategy development. Thanks to the work of many, including the team at the CPUC, that market uncertainty has now been eliminated through language changes in the proposed order made back in December by CPUC and then explicit clarification in the Commission’s scoping ruling issued on May 2. These clarifications from CPUC act to preserve a $1 billion per year EV infrastructure market for several years to come. Moving forward, we will remain engaged in this process to make sure that the California EV market, which already accounts for half of EV sales nationwide, continues on its upward trajectory.

Pennsylvania Considers the (Electrified) Road Ahead

Turning to the North East, the Pennsylvania Clean Transportation Infrastructure Act (SB596) was recently introduced in the Pennsylvania Senate. The bill, sponsored by Republican Sen. Bob Mensch, would establish a voluntary electrification target for the state, create a framework for assessing charging infrastructure needs, and expedite the deployment of infrastructure in the state. A similar bill got stuck in caucus deliberations in the House last year, but a lot of momentum is building for passage this session. We are happy to be part of a broad and diverse coalition of industry and non-profit organizations that are behind the bill, which enjoys a support letter with over 42 signatories from entities active in the state.

Last week, we organized an industry delegation that met with over 30 legislative offices in Harrisburg, including all the legislators on the Senate Consumer Protection Committee, the committee of jurisdiction for the Clean Transportation Infrastructure Act, as well as key members of the House. The group provided offices with an overview of the bill’s positive impact on their company’s operations and noted the importance of electric vehicle charging infrastructure to the economic development of a state that hosts critical pieces of the automotive and electrification industry supply chains.

The next day, we hosted an Electric Vehicle 101 and Business Panel Discussion for legislators and staff in the Capitol with representatives of General Motors, Eaton, Lord Corporation, and Proterra. The goal of this event was to provide an overview of the electric vehicle markets and the opportunities and challenges facing critical segments of the industry, including charging station equipment manufacturing and development, light-, medium, and heavy-duty vehicle manufacturing, and vehicle component manufacturing.

With increasing discussion of EV issues within the legislature and the Public Utilities Commission already engaged in a number of EV related dockets, the future of the Keystone State is increasingly looking electric.