STATE: Though Hardly an Olympic Event, Race for Offshore Wind Heats Up 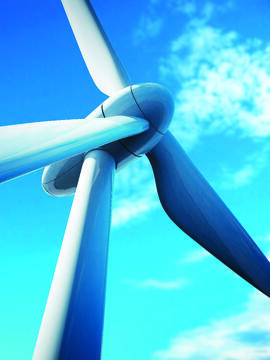 “The technology was developed by Maine students and Maine companies, and has attributes designed to bring offshore wind to economically competitive levels,” Maine Energy Director Patrick Woodcock said in a statement following the commission’s decision last month. “We will continue to support advancing the research and development of this Maine grown technology.”

The Maine project, as well as projects in New Jersey, Connecticut, Ohio, Oregon, Texas, and Virginia, received a $4 million federal Department of Energy (DOE) grant in December 2012. DOE is expected to award three of those seven an additional $43 million this year. The goal of the program is to commercially demonstrate innovative offshore wind technology by 2017, bringing down the cost of that vast power resource. The 30-MW Oregon pilot project, which also will demonstrate floating turbine technology, was given approval to pursue a lease for the state’s offshore wind energy area by the Department of Interior (DOI).

In addition to state policy and federal grant support for innovative projects, federal tax policy remains a key piece of the financing puzzle for the U.S. offshore wind industry. In the Maine Aqua Ventus term sheet, for example, the company could terminate the contract if the federal investment tax credit (ITC) is not available once the project goes into construction.

Last month, AEE and more than 60 companies and partner organizations delivered a letter to Congress calling for the extension of critical tax credits, including the production tax credit (PTC) and the ITC as an alternative to the PTC for utility-scale wind power (typically seen as more valuable for offshore wind than for on-shore), which expired at the close of 2013. As noted in the letter, federal tax credits have played a key role in priming the pump for innovative energy technologies, dating back to the 1926 percentage depletion allowance for oil and gas extraction. The PTC/ITC credits remain critical to the U.S. getting into the offshore wind game, which is well developed in Europe and getting ramped up in China as well.

According to DOE, U.S. offshore wind resources are four times the nation’s current total generation capacity. Despite this potential, if offshore wind development was an international olympic event, the United States would be nowhere near the medal stand. Collectively, European nations have built out over 6,500 MW, while China, Japan, and South Korea also have offshore wind turbines installed. Besides Maine, many states are looking to change this dynamic.

Massachusetts remains the top prospect for the nation’s first utility-scale offshore wind farm. In late December, Siemens AG signed a contract to supply turbines and an offshore electric service platform for the 468 MW Cape Wind project, as well as to service the turbines during the first 15 years of operation. In January, Pension Denmark announced that they are sticking with their $200 million financial commitment to the project. According to a spokesperson, Pension Denmark expects Cape Wind to qualify for the federal ITC based on how far the project progressed before the credit expired at the close of 2013. But Cape Wind – the only offshore wind project that has completed state and federal permitting – has been hit with yet another lawsuit from its arch nemesis, the Alliance to Protect Nantucket Sound, which is backed by (different brother but same family) Bill Koch, whose admitted strategy is “delay, delay, delay.” That legal action challenges the power purchase contract as up-ending federal primacy in regulation of wholesale electric rates. To date, not a single one of the numerous legal assaults on Cape Wind has passed muster.

Rhode Island also wants to be the first in the water. According to Jeff Grybowski, CEO of Deepwater Wind LLC, the company spent more than the 5% requirement by the close of 2013 on its 30 MW Block Island Wind Farm to qualify for the ITC. Gybowski has also said he’s “more confident than ever in the future of offshore wind in the U.S., and it begins here in Rhode Island.” The project is currently under permit review by the state Coastal Resources Management Council. Deepwater Wind also won the leases auctioned last summer for offshore wind energy areas off the coast of Massachusetts and Rhode Island, which could allow for a much larger project.

As offshore wind rounds the clubhouse turn, however, Maryland is breathing down the neck of the New England states, according to state officials. “I think Maryland has catapulted itself to the front of the line because of the legislation the general assembly passed [last year],” said Abigail Hopper, Director of the Maryland Energy Administration. The legislation creates a carve-out for offshore wind generation in Maryland’s Renewable Portfolio Standard (RPS), which is expected to support at least 200 MW of offshore wind. AEE and member companies Cianbro, Phoenix International, and McAllister Towing were active supporters of the bill, along with the Business Network for Maryland Offshore Windand AEE’s state partner, the Maryland Clean Energy Center. The Department of Interior (DOI) plans to auction the Maryland offshore wind energy area as two leases soon.

In contrast, the New Jersey Board of Public Utilities (BPU) has been slow to implement regulations for the offshore wind RPS carve-out Gov. Chris Christie signed into law in 2010. There remains significant company interest in the state, including the Fisherman’s Energy 25 MW and 330 MW proposals.  The Atlantic Wind Connection is proposing to build an offshore transmission line beginning in New Jersey and eventually connecting offshore wind farms south to Delaware, Maryland, and Virginia.

This map from NREL shows the potential that many other coastal states have for offshore wind development, from the East Coast to the West Coast and from the Gulf of Mexico to the Great Lakes: 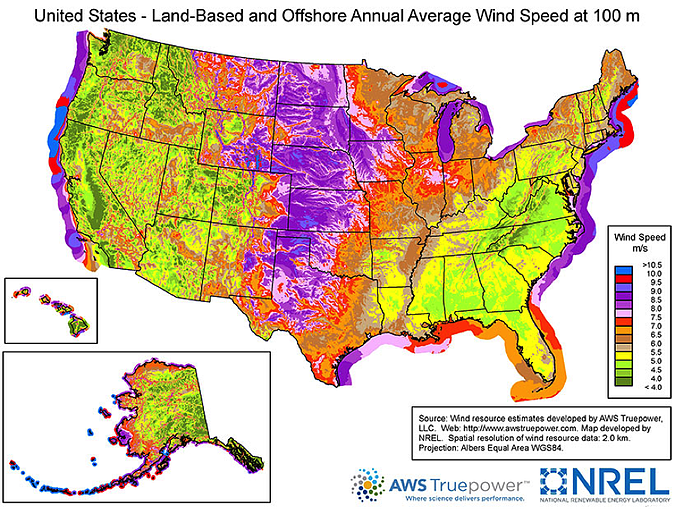 A great deal of potential lies off the coast of states that have yet to stake an offshore wind claim, such as Virginia, North Carolina and South Carolina.  In Virginia, Dominion Virginia Power won the lease for the state’s federal wind energy area last September but it remains to be seen when and how the state will support development under newly elected Gov. Terry McAuliffe. The New York Department of State released a study last year on its offshore wind resources, but it is still unclear how much New York will push forward for development under Gov. Andrew Cuomo.