As electric vehicles (EVs) start to take hold in the marketplace, one obstacle to wider acceptance remains: range anxiety. That’s the concern that your electric car might run out of juice before reaching your destination – or the nearest charging station. To compete on par with gasoline-powered vehicles, whose drivers’ range anxiety is relieved by gas stations located on street corners, in service areas, and by highway exits, EVs will need a similar infrastructure of charging stations – at home, on the road, and at workplaces.

“Providing electricity as a fuel makes our customers more like gas stations than utilities,” said Pasquale Romano, Chief Executive Officer at market leader ChargePoint, which sells charging equipment to property owners and other operators and provides a global online network connecting them. “Drivers are best served by a competitive market for charging services rather than a regulated monopoly market.”

Should providers of electric vehicle charging services be regulated as public utilities?

A range of entities may take on the role of EV charging service provider, including owners of individual charge stations, residential and commercial landlords that provide charging as a service to tenants or tenant customers, and employers offering charging to employees. The question of whether and how such entities will be regulated is up to each state to determine. State public utility laws often define “public utility” in broad terms, leading to uncertainty over whether state PUCs need to regulate entities providing electricity for EVs in the same way they do public utilities that deliver power to homes and businesses.

Owners and operators of charging stations, or electrical vehicle service equipment (EVSE), argue that the services they provide (such as access to charging equipment, use of related metering and communications software, network participation, billing, etc.) are not the same as traditional retail sales of electricity by a utility to local business and household consumers. They say they are themselves utility customers and it would be prohibitively expensive for them to comply with the extensive regulations covering public utilities. Moreover, requiring the PUC to regulate the hundreds or thousands of retail, commercial, municipal, and business owners providing public charging services would place an impractical regulatory burden on the commission itself.

Some utilities and interest groups have argued that since EVSE providers resell utility power, they are akin to public utilities and thus require PUC oversight for the good of the grid and ratepayers. But these arguments have not won the day. So far, regulators and legislators have determined that providers of charging equipment and services are not public utilities. Both the California PUC (CPUC) and Oregon PUC, based on their interpretations of state law, ruled that an entity providing electricity for electric vehicles is outside the definition of a public utility. The CPUC asserted that its existing regulatory authority was sufficient to “ensure that electric vehicle charging is integrated harmoniously into the electric grid” without full-blown utility regulation.It also drew an important distinction between EVSE providers that simply wish to act as utility customers and those that wish to procure electricity at wholesale. While the first type will not be regulated as public utilities, the second type will be subject to the same regulations as any other entity with access to wholesale power markets. In its ongoing alternative-fueled vehicle proceeding, the CPUC is striving to develop consistent standards and policies that will promote EV deployment while ensuring the environmental performance and integrity of California’s electric grid.

Numerous states have enacted legislation that specifically exempts charging station owner-operators from public utility regulations, including California, Oregon, Colorado, Florida, Hawaii, Illinois, Maryland, Minnesota, Washington, Virginia, and the District of Columbia. Most recently, in its 2013 session, the New York State Legislature introduced two bills to do the same and, around the same time, the state’s Public Service Commission opened a rulemaking to determine the regulatory status of charging station providers.

Should public utilities be allowed to own and operate charging stations? 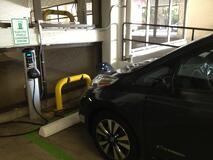 Another regulatory issue is whether investor-owned utilities should be permitted to provide residential or commercial charging stations either as part of their regulated operations or as non-utility operations. At the heart of the issue iswhether it is in the public interest for EV charging infrastructure to be deployed, and thus for ratepayers to shoulder the cost burden. In the traditional utility model, regulated utilities build infrastructure and recover from ratepayers the costs of that infrastructure plus a reasonable rate of return. Whether this model can or should be extended to electric vehicle charging stations is a topic of debate.

Utilities wanting to invest in EV charging infrastructure have argued that their ownership will minimize grid disruptions thanks to their unique knowledge of local distribution grid capabilities. Moreover, they typically advocate for operating charging stations as part of a regulated service where they can get rate recovery. This would enable them to build charging infrastructure in underserved markets, whereas private charging companies would follow consumer EV demand and build charging stations only where they are profitable.

Many independent EVSE providers counter that the operation of charging stations as part of a regulated service gives utilities an unfair advantage and discourages competition. Even in situations where utility ownership or operation of EVSE is segregated from utility operations, they argue, a utility’s pervasive presence may still provide unfair competitive advantage.

Few states have ruled on this issue and the two that have, the California and Oregon PUCs, reached different conclusions. The CPUC decided to exclude utilities from owning and operating public charging stations, finding that the potential for competitive limitations outweighed any potential safety or pricing advantages. In contrast, the Oregon PUC ruled in favor of unregulated participation by utilities in the EVSE market and further held that rate recovery of charging station costs would be permitted where a utility makes a compelling case that it would benefit ratepayers.

With the market for EVs rapidly expanding, the need for and extent of regulatory oversight is ripe for discussion and resolution. State PUC decisions on the treatment of EVSE service providers and the role of traditional utilities in the EV charging market could significantly affect the willingness of individuals and corporations to install EV chargers. By providing regulatory clarity around these and other issues related to the availability and price of electricity for vehicle charging, state PUCs can accelerate EV deployment and encourage entrepreneurs and investors to develop charging solutions that will fulfill consumer needs and work harmoniously with the power grid.

For more information about public utility commissions and their role in regulatory policy, check out AEE's PUC Portal.