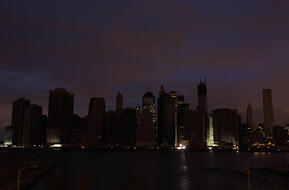 Though it’s been quiet thus far, it is hurricane season, which gave the new report from the White House on power outages from severe weather even more currency than it would have otherwise. The report, a product of the President’s Council of Economic Advisers and DOE, is titled “Economic Benefits of Increasing Electric Grid Resilience to Weather Outages,” but it’s really about the economic cost of widespread power outages from severe weather events, which have been on the rise over the past decade.

The cost: $18 billion to $33 billion in an “average” year, and as much as $75 billion in a year with “major” storms, like Hurricane Ike in 2008. The solution: “Continued investment in grid modernization and resilience will mitigate these costs over time – saving the economy billions of dollars and reducing the hardship experienced by millions of Americans when extreme weather strikes.” (Missing from this analysis is any estimate of job or other economic impacts of investing in grid upgrades.)

In Greentech Media, Stephen Lacey observed, “The White House report illustrates a shift in messaging over the last year, as advocates move away from the squishy term ‘smart grid’ to more concrete terms like ‘grid modernization’ and ‘grid resiliency.’ The phrase ‘smart grid’ is sparsely mentioned in the analysis.”

On the Washington Post’s Wonkblog, Brad Plumer drew a slightly different conclusion from the White House’s: The real problem may not be storms that are getting worse, but rather a grid that is getting old.

“Is severe weather on the rise? Or is the grid getting older and becoming more vulnerable to storms? There’s certainly some evidence in favor of the second hypothesis,” wrote Plumer. “Much of the existing power grid was built in the 1970s and 1980s — and there’s been a slowdown in construction since then. As a result:” – and here he quotes the report – “Seventy percent of the grid’s transmission lines and power transformers are now over 25 years old.”

As if weather doesn’t pose enough of a threat to the grid, utility workers and government officials are preparing for a drill in November simulating an even broader breakdown of the electric power system, which Matt Wald of the New York Times calls “the glass jaw of American industry.” The idea is to simulate a series of physical attacks or cyberattacks that disrupt large portions of the grid. More than 150 companies and organizations will participate in the exercise.

“This is different from a hurricane that hits X, Y and Z counties in the Southeast and they have a loss of power for three or four days,” Brian M. Harrell of the North American Electric Reliability Corporation told the Times. “We really want to go beyond that.”

In other industry news, the Tesla Model S gets a top safety rating, a big wind farm is going up at a federal nuclear weapons facility in Texas, microinverters make headway in large solar installations, and efficiency providers struggle to bundle projects – and financing – to reach scale.