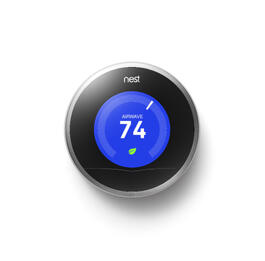 The big advanced energy news this week broke early: on Monday morning Google announced plans to acquire Nest Labs for $3.2 billion. The most famous product from Nest Labs is the Nest Thermostat, which allowed a home’s “learning” HVAC control system to be remotely controlled and networked with smoke and carbon monoxide alarms.

Katie Fehrenbacher, writing in GigaOM, noted some of the “winners and losers” from the deal. Winners include Nest investors (who saw significant returns on their investments), advanced energy investors overall, and the home energy management market, “which just hit the big time.” Losers included Apple (from which Nest execs were drawn), traditional thermostat makers, and privacy advocates, who wonder where all that home energy data is going. Fehrenbacher specifically noted the irony in one of Apple’s iPhone designers getting snatched up by Google, “Apple’s arch rival.”

Is this a brilliant move by Google to get into the advanced energy marketplace, or is it Google invading our daily lives? It depends who you ask. Stephen Lacey, writing for Greentech Media, rounded up the best responses to the acquisition. Standouts include this one from Jay Kirsch – “The Nest/Search combo is pretty darn close to the Star Trek bridge computer,” and this tweet from Lacey himself:

How funny. @60Minutes airs a story on how cleantech is dead. A week later, Google invests $3.2 billion in smart thermostat maker @nest.

Speaking of 60 Minutes, Vinod Khosla struck back this week, issuing an “Open Letter to 60 Minutes and CBS” with a point-by-point response to the broadcast’s claims, ranging from the amount of money Khosla has invested in advanced energy (“Fact: I have not invested over a billion dollars of my own money into cleantech. It is substantially less, and a simple query to us would have corrected this error. We manage a balanced portfolio, and it has not ‘crashed’ nor is it ‘dead.’ In fact, our returns are significantly above the venture capital average.”) to its characterization of DOE loan guarantees as only for renewables (“Fact: A substantial portion of DOE loans is allocated to nuclear energy, not just cleantech segments like biofuels, solar or wind, a fact conveniently left out despite your being aware of it.”) It’s an interesting, if long, read for those keeping score. For its part, 60 Minutes stands by its story.

Finally, First Solar, an AEE member company, has been in the news this week. For investors, Forbes lists First Solar’s “Three Factors To Watch in 2014,” which include using technological advances they acquired rights to in 2013, making inroads into growing Asian markets, and being able to deliver on its bookings. In a lengthy profile, Fortune Magazine (subscription only) writes, “First Solar is more than a survivor. It’s also a case study in the virtues of marrying wide-eyed technological optimism with patient capital that is willing to see a company through good times and bad.” The article notes the initial capital raised from the Walton family as a significant factor in First Solar’s success, “nurturing” the company through various ups and downs into the strong position it holds in the solar market today.