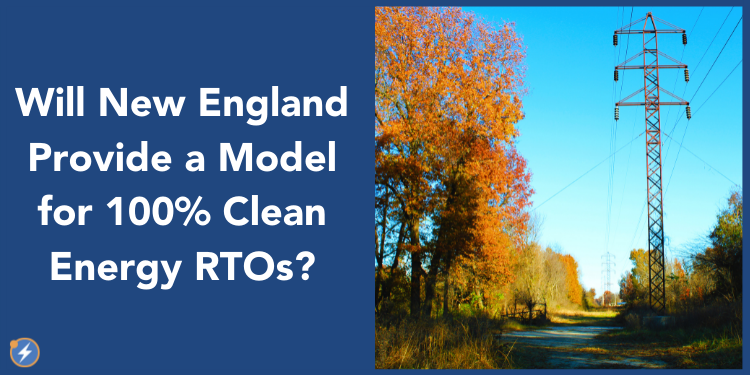 With so much of the advanced energy industry’s focus on issues before FERC directed at the expanded Minimum Offer Price Rule (MOPR) in PJM over the past few years, there has been relatively little attention placed on similar tension brewing in ISO New England (ISO-NE). But that tension was on full display at a FERC technical conference earlier this summer, and in comments filed in July. The list of big-ticket items up for debate in ISO-NE is long: reforming ISO-NE’s version of the MOPR, revising how capacity value is determined, pursuing long-term market reform and transmission planning reform, developing a plan for Order No. 2222 compliance, and exploring potential governance reforms are all top of mind for ISO-NE, the New England states, and stakeholders. For those who haven’t been following along at home, there’s a lot to catch up on, and the stakes are high: New England is poised to model what an RTO should look like in a 100% advanced energy future, but the decisions made in the next few years will determine whether that vision is realized.

NOTE: This post includes links to some documents via PowerSuite, AEE’s online policy tracking platform, with ISO/RTO documents available to PowerSuite Essential Plus and Pro subscribers. If you are new to PowerSuite, click here to sign up for a free trial.

Before diving into the issues, let’s recap who’s doing what. FERC held a technical conference focused on ISO-NE on May 25, and accepted comments on a series of post-conference questions through July 19; there are no specific next steps for the Commission charted out at this point. ISO-NE has, on its own accord, announced that it plans to file a proposal to reform the MOPR with FERC in Q1 of 2022, with the hope that new rules will be in place in time for the next upcoming Forward Capacity Auction (FCA 17). ISO-NE is also engaged alongside states and stakeholders on a series of studies related to long-term market and transmission planning reform: the Future Grid Reliability Study (examining reliability gaps under a future resource mix), the Future Pathways Study (exploring the impact of potential market reforms needed under the future resource mix), and a 2050 transmission needs study. Efforts to comply with Order No. 2222 are well underway, while a project to revise capacity accreditation has not kicked off, but is slated to get underway soon.

The New England states, meanwhile, have come together to organize their own effort to evaluate potential market, transmission, and governance reforms. After issuing a joint Vision Statement last October, the states held a series of technical sessions in early 2021 and recently released a summary report with recommendations to the New England governors. Members of the New England Power Pool (NEPOOL), ISO-NE’s stakeholder body, are engaged on all of the above.

Now that we’ve covered the actors, let’s dig into the action. MOPR reform is the headline event, drawing attention at the FERC technical conference and dominating discussions at NEPOOL. While ISO-NE’s version of the MOPR is less onerous than the expanded MOPR in place in PJM (and now on the road to being replaced), it has nevertheless been a source of tension as the majority of states in the region track toward ambitious clean energy and decarbonization targets. The compromise solution put in place a few years ago to enable clean resources receiving state support to enter the market, Competitive Auctions with Sponsored Policy Resources (CASPR), has not delivered the results many had hoped it would, with some seeing it as  a complete failure and others as in need of reform. ISO-NE’s commitment to reform MOPR reflects an acknowledgement that its “wait and see” argument on CASPR has run its course.

While comments at the FERC technical conference and in the docket demonstrate a fairly broad consensus that something must be done to address the tension between state policies and the wholesale markets in ISO-NE before it reaches a boiling point, the consensus does not extend much farther than that. A scan of comments in the FERC docket and recent presentations in the NEPOOL stakeholder process reveals the breadth of opinions on MOPR reform: Some stakeholders argue that MOPR must be repealed immediately and without replacement, while others argue that any effort to repeal MOPR must be accompanied by other reforms, ranging from improving retirement signals to ensuring continued protection against buyer-side market manipulation to prioritizing procurement of sufficient balancing resources to better valuing the contribution of resources to meeting reliability and resource adequacy needs to adjusting inputs to the Forward Capacity Market. States, meanwhile, are not entirely united on the issue of MOPR reform. While most are opposed to MOPR and dissatisfied with CASPR, New Hampshire officials continue to warn that MOPR repeal could violate their mandate to insulate ratepayers from the cost of meeting other states’ clean energy policies.

ISO-NE, for its part, has identified two concerns with a “clean” MOPR repeal that it says it will address in whatever proposal it files with the Commission next year: (1) increased uncertainty due to entry of state-sponsored resources that will cause merchant generators to require higher prices (which, without accompanying reforms, may fail to incent market entry at levels needed to retain resource adequacy), and (2) risk of “disorderly retirement” as resources exit the market due to market entry of state-sponsored resources. ISO-NE has tasked Potomac Economics with analyzing the risk and developing potential solutions, and stakeholders saw the initial outline of that work on June 26. The focus of Potomac’s work is on increased capital risk for merchant generators in a non-MOPR world, with the expected recommendation being that the net Cost of New Entry used as an input in the Forward Capacity Auction (FCA) should be adjusted up.

Regardless of the positions taken on MOPR, most stakeholders—including AEE—agree that reforms cannot stop when the MOPR filing (whatever it ultimately contains) arrives at FERC.

ISO-NE has also announced that it will pursue reforms to the rules governing how capacity is valued (i.e., how much capacity a given resource can sell); this work has not started, but is slated to kick off soon. Importantly, at the technical conference ISO-NE committed to evaluate the resource adequacy contribution of all resources, not just energy-limited resources like storage or intermittent resources like wind and solar. This represents an improvement over a similar effort in PJM, where FERC recently approved a revised capacity valuation methodology that only applies to energy storage, wind, and solar. While AEE supported this change for energy storage, we opposed applying the new rules to only a subset of the fleet, arguing that it would result in preferential treatment for conventional fossil fuel resources.

More broadly, there is a lot of interest in the region in fundamental, long-term market reforms that would allow the wholesale markets to not just get out of the way of meeting state policy goals but actually facilitate achievement of these goals. ISO-NE, the New England states (working through the New England States Committee on Electricity, or NESCOE), and NEPOOL are scoping an analysis of three such proposed reforms: the Forward Clean Energy Market and Integrated Clean Capacity Market (FCEM/ICCM), net carbon pricing, and a “hybrid” of FCEM/ICCM combined with net carbon pricing.

These proposals got a lot of air time at the FERC technical conference, and stakeholders spilled a lot of ink on them in post-conference comments. Many states expressed either support or interest in the FCEM/ICCM proposal, which would allow states and other buyers to express their demand for clean energy through a forward, centralized market. In theory, this would reduce the need for states to pursue mandated long-term contracts for clean resources, which some states (and even some advanced energy companies) have indicated a desire to move away from. Whether this goal can be achieved in practice will depend on how such a market is designed and implemented; AEE’s comments outline the pros, cons, and unanswered questions associated with FCEM/ICCM. ISO-NE has made no secret of the fact that its preferred solution is carbon pricing, but ISO-NE CEO Gordon van Welie admitted at the technical conference that a more aggressive carbon price is “not politically attainable in the region” and expressed openness to FCEM as a potentially workable alternative.

Underpinning all of these market reform debates is the issue of ISO-NE governance. States made very clear in a Vision Statement last October, in verbal comments at the FERC technical conference in May, and in post-conference filings in July that governance reform cannot come soon enough. Specifically, the states are dissatisfied with the extent to which they are able to impact priorities to be taken up by ISO-NE, weigh in as issues are scoped, and have their input taken into account in ISO-NE decisions and filings. In the Vision Statement, the states asked ISO-NE and the Board to “convene a collaborative process with States and stakeholders” to engage on governance reform, and in post-conference comments NESCOE observes that “ISO-NE has yet to convene that process.” Several state officials at the technical conference made clear that governance reform is foundational to making progress on any of the other pressing, pending issues in the region.

All in all, if you haven’t been following what’s going on in ISO-NE, now might be a good time to start paying attention. The region holds the potential to model what the “RTO of the Future” might look like: a wholesale market that leverages the benefits of regional competition to enable and accelerate the clean energy transition, supports state policy goals to procure more clean energy and capacity, and serves increased customer demands for clean energy—all more cost-effectively and reliably than balkanized utility-by-utility or state-by-state market and system operations. There seems to be good alignment in the region that this end goal is desirable, but getting there is not a straight line.

Keep up with advanced energy legislative and regulatory action in Congress, FERC, and all 50 states, including RTOs/ISOs, with AEE’s PowerSuite. PowerSuite Essential subscribers can get access to RTO/ISO documents by upgrading to Essential Plus or Pro. Non-subscribers can click below to start a free trial.