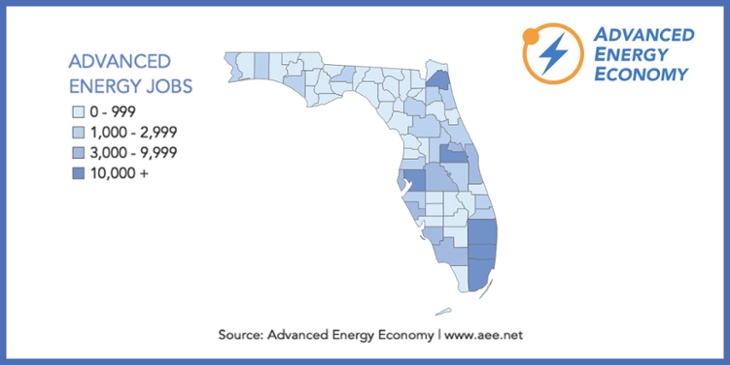 Florida was recently named the 3rd Best State in the nation for economic growth in 2018 by U.S. News & World Report. Florida’s jobs future may be as bright as its nickname – “The Sunshine State” – but some sectors are growing faster than others. One of them is the advanced energy industry, which showed job growth more than double overall job growth in the state last year. In everything from electric vehicles to energy efficiency and solar energy, the forecast looks sunny for advanced energy jobs in Florida.

As demonstrated by AEE’s Florida Employment Fact Sheet, more than 174,000 people in the Sunshine State are employed in the industry as of 2018. Let’s put those numbers in context: That is three times the number of jobs in agriculture in the state, and it outnumbers the workers employed in Florida’s real estate sector. Jobs supported by advanced energy business activity can be found in every corner of the state, from the coastal communities lining the Panhandle to Jacksonville in the Northeast to sun-soaked Miami Beach.

Last year, employment in the sector expanded by 5%, more than double the 2% growth in Florida jobs overall. In the upcoming year, employers expect to add advanced energy jobs at the same 5% rate. Last week, the Florida Department of Agriculture and Consumer Services – which oversees the Office of Energy – held the the 2019 Florida Energy and Climate Summit. AEE was invited to speak on a panel to discuss workforce development implications of advanced energy employment in Florida. AEE presented the findings of the Employment Fact Sheet, and talked about the opportunities that advanced energy brings to Florida.

In addition to jobs, the value that advanced energy brings Floridians is the ability to diversify our energy economy at a time when the state is facing rising energy demands. Over 900 people move to Florida per day – that’s equivalent to adding a city the size of Orlando every year. Advanced energy has the potential to address some of the major challenges and opportunities of growth with affordable energy resources like solar, storage, and energy efficiency.

The full suite of advanced energy technologies can be employed to deliver maximal benefits to the state and its residents, but also to existing markets within the state. Florida Power and Light announced a plan earlier this year to invest in more than 30 million solar panels by 2030 under its “30 by 30” campaign. At the same time, large energy users are seeking to meet their energy needs from renewable energy resources – another source of advanced energy growth from meeting consumer demand.

Another advanced energy segment to watch is advanced transportation, which employs 9,400 Floridians already. In July, Gov. Ron DeSantis announced a plan for significantly expanding electric vehicle charging stations along the Florida Turnpike. Also,  the Florida Department of Environmental Protection announced a Draft Mitigation Plan for its $166 million share of the Volkswagen settlement funds, a unique, one-time opportunity to drive market transformation in this sector, as long as the funds are used to maximize the benefits of electrification in the short and long run. And the Florida Office of Energy has begun to undertake a dialogue with key stakeholders on an EV Roadmap, which will help boost the EV market with charging infrastructure build-out across the state.

Companies and utilities in the state are now tasked with supporting the energy and lifestyle demands of Floridians, old and new. Advanced energy will rise to this occasion, as it holds the key to diversifying Florida’s energy resources, which will simultaneously create homegrown jobs and help the state make the most of changing energy demands and opportunities. A bright future lies ahead for the Sunshine State, and AEE is proud to be a part of building it.