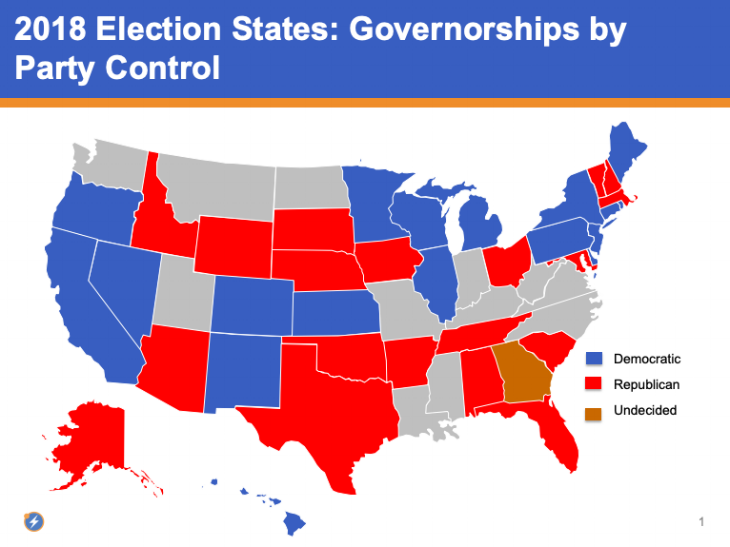 One week after the election, we can confidently say that Americans from all walks of the political spectrum were energized to vote. It was the largest turnout in a midterm election in 50 years, with over 110 million ballots cast across the country. As we look to what this means for the industry, it is clear that Americans want their elected leaders to prioritize advanced energy policy at both the state and federal level. New market and policy opportunities emerge at the state and federal level from the election results. Here are AEE’s top five takeaways on the election and what it means for advanced energy.

Tuesday was a strong night for candidates that embraced advanced energy, early and often, as part of their platforms. Among the slate of candidates running on 100% clean or renewable energy by a certain date are eight new governor-elects: Jared Polis of Colorado, J.B. Pritzker of Illinois, Janet Mills of Maine, Gretchen Whitmer of Michigan, Kate Brown of Oregon, Steve Sisolak of Nevada, Michelle Lujan Grisham of New Mexico, and Tony Evers of Wisconsin.

While we have known for years that both Democratic and Republican voters want elected officials who support advanced energy options, the election results from last week – even as results from some states trickle in – demonstrate that candidates can win when they embrace policies to grow the industry and give consumers the type of energy they want.

On the other hand,  the results on state ballot initiatives were a mixed bag. Some ballot questions pertaining to advanced energy failed: in Arizona (RPS expansion), Nevada (energy choice), and Washington (carbon tax). At the same time, however, Nevadans voted in favor of increasing the state’s RPS. Due to the fact that the RPS would be enshrined in the state’s constitution, voters must approve the measure again in 2020 for it to take effect – unless the legislature acts in 2019.

In Arizona and Washington, these ballot questions became high-profile contests that drew in spending on both sides, which typically favors a “no” vote. Meanwhile, in Nevada, two semi-related proposals got decoupled. In 2016, support for energy choice initiative, where it was presented as a pathway to clean energy for Nevada, reached nearly 70%. But this year, with utility NV Energy promising an aggressive buildout of renewable energy as part of its IRP – and many RPS advocates staying on the sidelines – the push to energy choice lost steam.

Coming out of the election, we see two major trends at the state level, representing major policy and market opportunities for the advanced energy industry.

First, new elected officials in the west are likely to seek increases in Renewable Portfolio Standards in their states. WIth gubernatorial races in Colorado, New Mexico, and Nevada all going toward candidates who ran on advanced energy, there is a major opportunity to expand the market through an increased RPS, or other market-based policy to accelerate advanced energy deployment, in these states.

Second, gubernatorial candidates in the Midwest – namely in Illinois, Michigan, and Minnesota – have ll been particularly vocal on the need for their states to lead on climate change. Some policy advocates believe this could lead to the Rust Belt revisiting carbon policy at the state level. The details are yet to be determined as states could pursue an individual carbon regulatory program or choose to set up a linked-regional market among states, but policy action on climate change generally boosts market opportunities for advanced energy technologies across the board. Stay tuned.

Chatter in media circles and around D.C. has focused on the loss of moderate Republicans as evidence that pro-advanced energy stances don’t help candidates . We have a different take. The economic power of advanced energy continues to build bipartisan bridges, even as some advanced energy champions fall by the wayside.

Across the board, candidates running on advanced energy performed well, including former advanced energy businessman Democrat Sean Casten, who made it the cornerstone of his campaign’s platform for Congress in Illinois, as well as Republican William Timmons, who won election to succeed retiring Rep. Trey Gowdy in South Carolina. This bipartisan support for advanced energy will be critical a proponents of bailing out uneconomic power plants likely to come to Congress for help.

“If all else is equal and I can get solar energy for the same price with no emissions vs. fossil fuels that have emissions, I don't see any reason not to go the cleaner route,” Timmons told the Washington Examiner, adding that solar supports about 700 to 800 jobs in the South Carolina district he will now represent. “This is the free market working.”

Incoming Energy and Commerce Chair Frank Pallone has noted that advanced energy will be a priority for the incoming Congress. With proponents of bailing out uneconomic power plants likely coming to Congress for help, we will be looking for more champions of technology-neutral markets to stand up  advanced energy.

Divided government may mean gridlock, so look to FERC for action

House Democrats have indicated their interest in pursuing modernizing the American infrastructure system in an effort to work on bipartisan policies that President Trump supports. This legislation could include many advanced energy priorities, whether funding for energy efficiency upgrades, localized distributed energy projects, or electric vehicle charging infrastructure.

Still, divided government can lead to legislative gridlock. But the door can open for other policy opportunities, particularly on the regulatory side. With a House Democratic caucus prioritizing advanced energy and oversight, we believe Committees can work with agencies like FERC to pursue policies that open markets for innovative, advanced energy resources like storage, electric vehicles, demand response, renewables, and many others.