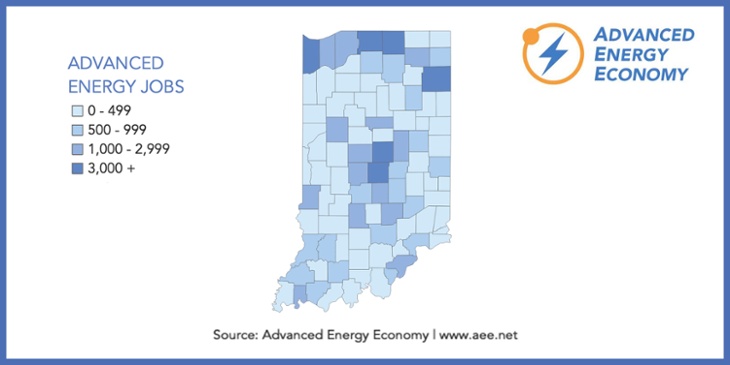 “Indiana – a State That Works.” That’s the state’s motto, and every Hoosier knows it. What Hoosiers may not know is that the cost of doing business in Indiana has gotten higher due to significantly increased electricity rates over the past few years. If you ask business owners across the state, they will tell you that their energy-related costs have gone up, leaving them with less money to spend on expanding their business, hiring more employees, or investing in their own companies. The ability to control energy costs and sources is critical, especially for companies that consume a large amount of energy. Fortunately, advanced energy offers an opportunity for Indiana to offer low-cost and reliable energy to businesses. At the same time, advanced energy has become a significant source of  employment in the state – more jobs than auto parts manufacturing, twice as many as in schools and universities, and growing four times as fast as Indiana jobs overall.

In the past, Indiana offered low electricity rates to households and businesses, which made a strong case for companies to have operations in the Hoosier state. Today, however, Indiana ranks 29th in the country for commercial electricity rates and 28th in the country for industrial electricity prices. Advanced energy solutions can help lower the cost of electricity for businesses in Indiana. As followers of the energy industry know, renewable energy technologies have significantly dropped in price over the years – 88% drop in costs for solar and 69% drop in costs for wind since 2009. This trend holds true in Indiana, too. Last year, the Northern Indiana Public Service Co. (NIPSCO) announced an Integrated Resource Plan (IRP) to retire its coal fleet by 2028 and replace that capacity with a combination of wind, solar, demand-side resources, and energy storage. NIPSCO estimates this could save ratepayers $4 billion.

Advanced energy is also helping Indiana when it comes to jobs and economic development. According to AEE’s employment fact sheet released last week, advanced energy now employs over 90,000 Hoosiers; this represents significantly more workers than those in Auto Parts Manufacturing (64,873), and nearly double those working at Schools, Colleges, and Training Programs (52,217) across the state. Overall, Indiana’s advanced energy jobs increased 4% last year, four times the state’s overall 1% jobs growth. The fastest growing segment was advanced vehicles, which experienced an 18% jump in jobs over the previous year.

Other key Indiana employment details in the fact sheet show: