A Shift Toward Rewarding Utilities for Performance

Recently states have been hearing pushback from utilities on some standard energy policies that have been adopted around the country. Net metering, for example, has been criticized by utilities as excluding a subset of customers from paying a portion of the costs of utility infrastructure that is embedded in rates. Energy efficiency standards have been targeted for similar reasons. Last week, we looked at recent stories in the media describing traditional utilities as “dinosaurs” or in a “death spiral.”

Some metrics commonly included in Performance Based Regulation (PBR) include:

In the UK, an example of this approach is called the Revenue set to deliver strong Incentives, Innovation and Outputs or the “RIIO” model. RIIO was developed by the UK’s Office of Gas and Electricity Markets (OfGEM).

For each of these fundamental output categories, a measurement criterion called a “primary output” was developed so achievement could be accurately measured. Finally, “secondary deliverables” were the long-term objective of the primary outputs. These help the utility maintain a vision toward long term objectives, planning and maintaining a value for the system and the customer.

The utility then receives a return based on their success in achieving these objectives or delivering on the primary outputs.

Within the UK RIIO model “stakeholders,” broadly defined as any entity having a stake in the utility’s output, play a role in scoring the success in meeting objectives. Scorecards, such as the one below, reflect their perception of the utility’s success. 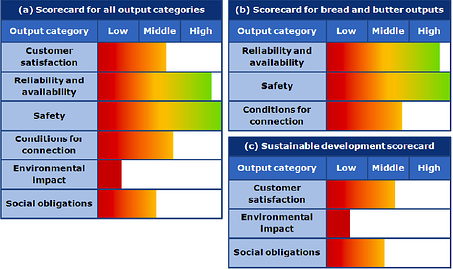 In the US, measurement criteria have already been created that can allow for quantified third party evaluations for such things as “customer satisfaction.” J.D. Power, for example, measures customer satisfaction based on a variety of factors including: power quality and reliability, price, billing and payment, corporate citizenship, communications, and customer service.

Conceivably, PUCs could determine the rate of return for a utility based on this type of measurement of their primary objectives and outputs. Rate cases could look at secondary objectives to capture value of long-term investment strategies.

Clearly, this is a model that would need adjustment in the US market, however there may be a role for state legislatures to establish the objectives and output categories (public policy priorities) and direct the PUC to develop the primary outputs for measurement. Dockets could be initiated to investigate the development of this type of output based revenue model that would shift the fundamental paradigm of return based on inputs to return based on outputs.

While a shift of this magnitude would not happen overnight, 2014 may be an opportune time to begin to investigate alternative revenue models. Consider many renewable portfolio standards and energy efficiency standards are set to expire in 2020, final rules around greenhouse gas emission regulation for power plants are expected by 2015, and many advanced energy technologies are achieving financial market viability. This may be just the time to develop potential technology neutral alternatives that align utility financial objectives with society’s broader energy objectives, driving a market for innovation and creativity in the utility sector.

Now, that’s something to get excited about!

Something else to get excited about: AEE's weekly newsletter. It's news and analysis just like this delivered to your inbox every Friday. Sign up by clicking the button below.

The charts used in this post come from "Handbook for implementing the RIIO model," prepared by UK Office of Gas and Electricity Markets (OFGEM), October 4, 2010, Figure 13, page 31 and Figure 23, page 81.