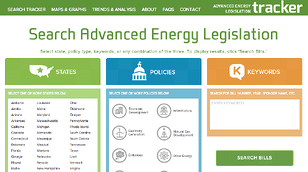 Many state legislatures follow a four-to-six month schedule beginning in January. That puts us right about at the mid-way point – a good time to check in on the progress of advanced energy legislation in state houses all over the country.

AEE partners are successfully pursuing a wide range of advanced energy policies across the country.  Here’s a snapshot the legislation on the move in 15 states that we are following:

Maryland: In the third try for Governor Martin O’Malley, a 2.5% offshore wind carve-out within the state’s RPS, now signed into law, will drive investment into development of an offshore wind industry in Maryland – and the United States as a whole, as the first offshore wind turbine has yet to be put in the water.

In Colorado, a series of bills have passed the first house and are being considered in the second house. These include: legislation to create an innovation investment fund to spur investment in economic development within the advanced energy sector; legislation to promote alternative fuel vehicles within the state fleet; and a bill targeted at reducing barriers to electric vehicle charging infrastructure within HOAs. A bill modeled after New Mexico’s legislation (see below) to provide a homeowner’s tax credit for energy efficient construction has passed the Senate and is being heard in the House.   Legislation to expand the state’s performance contracting to state fleets and expand energy efficiency programs is expected in the latter half of the session, as well as legislation to remove the multiplier for in-state generation in the RPS statute, which has been challenged in court.

In New Mexico, the tax credit for efficient homes legislation that failed last year is moving forward this year, encouraging hopes of a passage.  Other advanced energy legislation has already made it into law, including a landmark bill to expand the measures that qualify for the efficiency standard by moving from a “total resource cost” test to a “utility cost” test. Bills to create uniform permitting standards for solar installations and reduce the valuation of renewable energy equipment have both passed the legislature.

In Ohio, the advanced energy game is defense. Legislation has been introduced to limit both the energy efficiency resource standard and the renewable portfolio standard.  AEE Ohio is working with a broad coalition to defend these two established and effective policies.

In Illinois, SB 103 has been introduced to fix the way the state purchases renewable energy under its RPS through the Illinois Power Authority – a problem that became critical when the city of Chicago voted last November for municipal aggregation, which would take the state’s largest group of customers out of the purchasing pool.

In Arkansas, AEE’s partner, the Arkansas Advanced Energy Association, is pushing legislation to provide a Production Tax Credit for biofuels, a CNG fueling infrastructure bill, legislation to provide tax credits for manufacturing and installation of solar resources, a measure that would fix and expand the state’s energy performance contracting system, and legislation to establish Property Assessed Clean Energy (PACE) financing for commercial buildings.  AAEA is also leading opposition to a bill that would prohibit demand response energy savings from qualifying as a resource.

Meanwhile, New England has been a hot bed of activity, with much of the work led by our partner, the New England Clean Energy Council.

In Massachusetts, legislation is moving forward to standardize property tax treatment for solar investments. Also, legislation has been introduced to allow for renewable thermal to count toward the state’s Alternative Energy Portfolio Standard (APS), as well as legislation to further specify the state’s greenhouse gas emissions limits, adding a 2030 requirement of 45 to 60 percent below 1990 levels to the 2020 requirement of 25 percent set by the state, on the way to a required 80 percent by 2050.  Also in Massachusetts, legislation to promote electric vehicle expansion and an interesting approach that would allow for expedited permitting for achieving certain energy efficiency goals.

New Hampshire is simultaneously fighting efforts to enact a wind siting moratorium (we’re seeing a trend of this type of legislation in New England, starting with Vermont) and allowing group ownership of net metered systems.

In Connecticut, legislation to expand the state’s RPS has been introduced.  Our partner there is working to remedy a problematic provision that extends eligibility to large hydro projects, which could easily fulfill the entire RPS requirement, leaving little room for other technologies. Our partner is also supporting provisions to establish long term contracting, which will drive down costs to consumers.

In Maine, the state’s renewable standard has a 100MW cap on size, with an exception for wind developments.  Legislation has been proposed that would remove the 100MW limitation for all resources, opening up the RPS to include large hydropower from Canada.  NECEC is working to revise it. Also, bonding legislation that will support energy efficiency and weatherization investments has been introduced in the legislature.

In Oregon, AEE testified in support of legislation to expand the state’s successful pilot for comparative analysis of energy use for utility consumers.

In California, several bills are moving forward to allocate the financial investment of Proposition 39, which passed in November.  The ballot initiative committed approximately $500M toward energy efficiency investments in the public sector, focusing on schools.  AEE has been leading a stakeholder process to support responsible expenditure of the revenues to result in maximum benefit for the industry and the state.

States continue to lead the way in implementation of innovative policies.  Based on the activity level to date, the rest of the legislative session in these states should be a barnburner for advanced energy. AEE will be following it all closely in the coming months – and facilitating the exchange of best practices across the country.