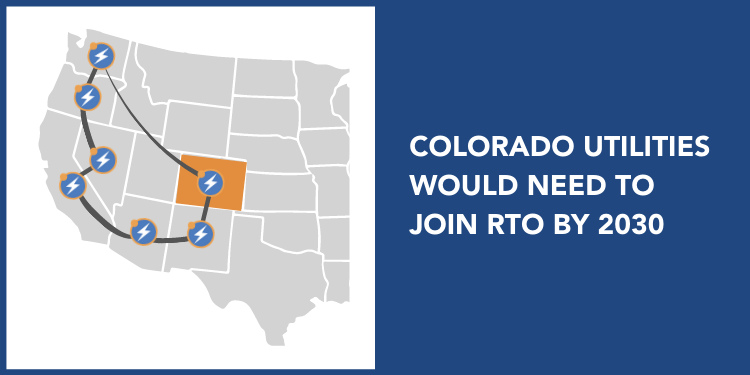 This legislative session, Colorado is on its way toward modernizing how electricity infrastructure is built and propelling the interstate conversation on grid regionalization. Passed by the Colorado Senate and approved by its first committee in the House, bipartisan Senate Bill 72  would put Colorado on the map for leading the West toward a regional electricity market that helps the Rocky Mountain State capitalize on its immense resources and give households and businesses from New Mexico to Washington State the affordable clean energy they want. All it will take is one last push in the Colorado House of Representatives.

Colorado is poised to lead on advanced energy in the West, but its ability to capitalize on its resource advantage is constrained by an outdated electrical transmission system that creates unnecessary risk for new project development and is ill-equipped to meet increasing consumer demand for affordable advanced energy. Simply put, Colorado’s transmission planning is overdue for an upgrade to better serve ratepayers and the power grid. SB 72 (Hansen, Coram, A. Valdez, and Catlin) would provide that upgrade. It would establish a streamlined, one-stop shop – based on successful models in other states – for transmission projects to be evaluated, financed, and built. This would minimize cost and inefficiencies in how energy is moved across the state and across state lines.

Importantly, SB 72 also sets a clear goal for Colorado utilities to join a regional transmission organization (RTO) no later than 2030.

Across the West, a number of states have set their sights on transitioning to 100% clean energy. Their success in achieving a clean grid will depend on the region working together to address supply and demand challenges and keeping the system reliable as extreme weather events and climate risk increase stress on the system. Updating Colorado’s transmission system and putting utilities on a path to RTO participation are essential to meeting the goals outlined in the Polis Administration’s Roadmap to 100% Renewable Energy by 2040 and Bold Climate Action without driving up energy costs to ratepayers and businesses. This also puts Colorado in a leadership position to drive the RTO conversation in the West as other states look to meet their energy needs and discuss pathways to achieve their climate goals.

Colorado is surrounded by other renewables-rich states – New Mexico, Arizona, Utah, and Nevada among them – that also see an opportunity to attract Fortune 500 companies that rely on access to low-cost advanced energy to fulfill their sustainability commitments and power their operations affordably. For corporate energy buyers seeking out competitive renewable energy options, regions with established RTO markets are a winning value proposition. Removing barriers to continued voluntary purchases of advanced energy by these companies will remain an important component to realizing Colorado’s 100% clean energy by 2040 goal.

AEE has been a strong supporter of SB 72 from the beginning, recognizing that it makes little sense for states to go it alone on the road to pursuing the deep cost reductions and GHG-emission reductions most efficiently afforded by a regionally integrated grid. The combined economic and environmental prospects of a better transmission and power delivery network has motivated a diverse coalition of allies, including electric cooperatives serving rural communities across the state, environmental groups, advanced energy business associations, renewable energy developers, and corporate energy buyers, to support this bill.

SB 72 got off on a promising footing in the Legislature with its passage in the Senate Transportation and Energy Committee on a 5-1 bipartisan vote. Weeks later, the bill cleared the Senate Appropriations Committee to move to the Senate Floor on a similarly solid 5-2 vote with bipartisan support. Throughout these initial milestones, AEE has worked alongside other advocacy groups to underscore the comprehensive economic development opportunity inherent to the in-state transmission infrastructure and advanced energy projects unlocked by an optimized grid system. On April 14, the bill completed its journey through the first chamber, securing passage out of the Senate on an impressive and bipartisan 28-6 vote, encompassing the support of all Democratic legislators (save one absence) and several Republican lawmakers, including Senate minority leadership.

After several rounds of constructive discussion, labor has taken a neutral position on the bill. This leaves investor-owned utilities as the chief opponents to the bill going into the House Floor vote. There have been multiple attempts to derail the bill and water down key provisions. Thus far these attempts have failed, but opponents are expected to continue their efforts to stall the bill progress.

SB 72 has gotten off to a great start in the House. On April 29, the bill cleared the House Energy and Environment Committee on another strong bipartisan vote (11-2). The bill is now en route to the Appropriations Committee before its decisive moment on the House Floor.

In this final stretch, AEE and the coalition of supporters will continue to underscore why this bill is the right step forward for Colorado ratepayers, businesses, and the Governor’s legacy. SB 72 is a win-win solution that Colorado cannot afford to pass up. By putting this bill into law, Colorado is poised to reap the rewards for its readiness to act as a leader in the West.

Coloradans who want to join the push for a modern grid in Colorado and the West can urge their representatives to support SB 72 by clicking below.