With Nearly 600,000 Jobs Lost, the Time is Now for Congress to Aid Advanced Energy 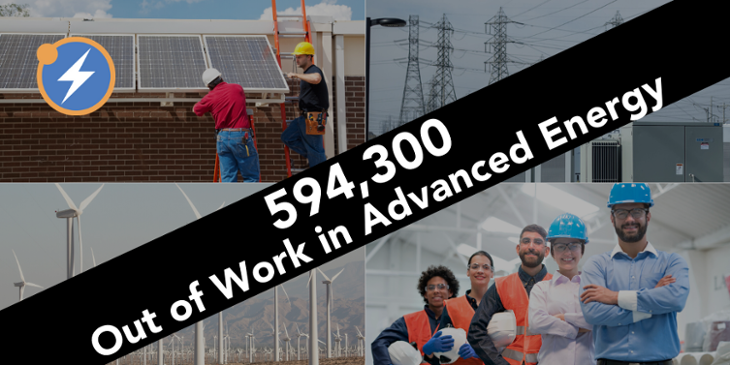 In just two short months, the COVID-19 pandemic has devastated the American economy. The unemployment rate has reached levels that the country has not seen since the Great Depression nearly 100 years ago. Congress and the Trump Administration have responded by providing trillions of dollars of immediate relief to businesses and households to avoid even worse impacts. But no action has been taken on a simple measure that could help save hundreds of thousands of advanced energy jobs that otherwise may never return. The time to act is now, because time is running out.

While other industries have called for billions of dollars, if not more, for protection, what the advanced energy industry needs now is a simple fix that does not require a big outlay from the U.S. Treasury. By changing existing tax credits to a direct pay model Congress can help avoid the loss of hundreds of thousands of jobs. If Congress fails to act in the coming weeks, however, we will see hundreds of advanced energy businesses – many of them small – shut down, and hundreds of thousands of jobs lost, possibly forever.

While Congress has been reluctant to support industry-specific requests for big payouts, changing tax credits to direct pay is different, for three major reasons:

In a recent survey, 60% of AEE members indicated that direct pay of federal tax credits would give them immediate relief. Simply put, it would provide immediate relief and financial certainty to advanced energy companies, helping to stave off the loss of hundreds of thousands of jobs. It would not solve every problem for the industry and does not address the role that advanced energy can play in economic recovery through a stimulus package, but it’s a start.

Congress is currently preparing legislation for a fifth emergency package to help the country respond to COVID-19. This week, House Democrats unveiled $3 trillion relief legislation that includes nothing for advanced energy. This is a disappointment. Since last year, numerous members of Congress have adopted the mantle of leadership on advanced energy, releasing proposals to grow the industry. Now, as the industry sheds nearly 600,000 workers, we need them to step up and get behind the relief measure AEE has called for since the downturn began in March: a direct pay option to provide companies the capital and business certainty they need to avoid the worst of layoffs.

The stakes could not be higher. With many advanced energy companies being small businesses, they may not survive if no action is taken quickly. That means they won’t be around to help drive the subsequent economic recovery.

And drive it they would. Prior to the pandemic, advanced energy employment had grown to 3.6 million across the United States, and the industry has grown at twice the rate of the overall economy in recent years. Advanced energy resources are now the most cost-effective ways to power American homes and businesses. For example, an Indiana utility recently made the decision to retire its coal plants in favor of advanced energy, expecting to save its customers $4 billion.

When the time comes to jump-start the coronavirus-stopped U.S. economy, a major stimulus effort should leverage private investment in advanced energy technologies, products, and services. But now is not the time. What’s needed right now is to stop the bleeding for businesses. Changing existing tax credits to direct pay will do that for hundreds of advanced energy businesses, which will help preserve hundreds of thousands of jobs. There is not a moment to lose.