Will Clean Energy Commitments Lead to a Regional Market in the West? 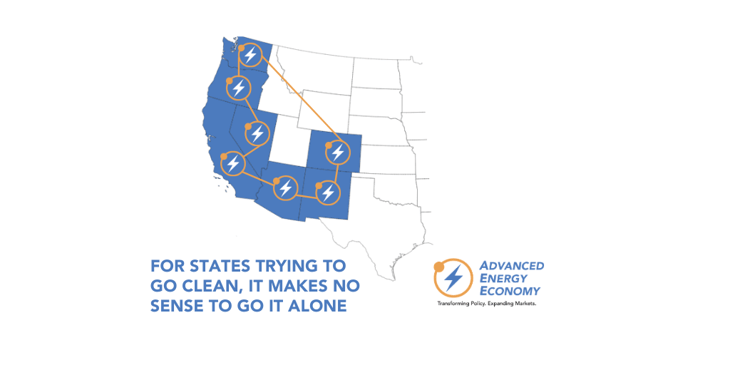 As momentum builds for clean energy, the Western states are leading by example. From California to Colorado, Washington to New Mexico, states have set ambitious goals, and are now starting to figure out how to meet them. Suddenly, the notion of a regional power grid, instead of the electric power system managed state by state, has growing appeal in the independent-minded West. Could regionalizing the grid help these states reach their goals? And if so, what would a regional power market look like? AEE has put forward some principles to contribute to the conversation.

Here are the goals that have been put into place in the pacesetting West: California has committed to a 100% carbon-free electric sector by 2045. Colorado plans to reduce carbon emissions from a 2005 baseline 50% by 2030 and 90% by 2040. Nevada has enacted a mandate to source 50% of electricity from renewables by 2030 and reach 100% carbon-free by 2050. Washington plans for the state’s utilities to be carbon neutral by 2030 and 100% clean by 2045. Oregon has committed to an electricity sector that is 50% renewable by 2040, and New Mexico is requiring investor-owned utilities and rural electric coops to go zero-carbon by 2045 and 2050, respectively. Arizona has made no statewide commitment, but Arizona Public Service Co., the state’s largest utility, recently announced goals of 65% clean energy by 2030 and carbon-free electricity by 2050.

As states begin to chart their roadmaps toward these ambitious targets, they are finding that it makes little sense to go it alone. Inefficiencies in maintaining 38 separate balancing authorities in the Western Interconnection and planning major infrastructure projects in isolation are costing ratepayers, utilities, and state budgets. The lack of cooperation and coordination also makes it difficult to integrate the amount of variable renewable resources necessary to achieve public policy goals. Notably, the Western Flexibility Assessment conducted on behalf of the Western Interstate Energy Board recently concluded that to meet state policy goals in 2035 and beyond in an affordable way, full regional grid operations are unavoidable.

Most Western states already recognize this. In addition to an investigatory docket on western market regionalization in Colorado, legislative hearings in Nevada, and a Department of Energy funded market study with 11 actively participating states, a handful of balancing authorities and utilities across the West have begun moving towards a shared-resource model. The California Independent System Operator’s Energy Imbalance Market (EIM) has delivered over $800 million in gross savings since its inception in November 2014 by facilitating a real-time energy market for utilities throughout the West. Participants are eager to expand the EIM into an extended day ahead market (EDAM), but even this falls short of the potential of a full regional wholesale market as facilitated by a Western Regional Transmission Organization (RTO).

Benefits of a western RTO are far reaching and broad, some easily quantifiable and others less so but nevertheless crucial to a reliable, cost-effective, clean, and secure grid. These benefits include the ability to reliably integrate more low-cost, renewable energy with fewer curtailment incidents due to over-generation, increased market liquidity due to expanded availability of offtakers, and enhanced reliability due to a larger and more diverse resource portfolio. A fully integrated western grid will also lower ratepayer costs by reducing stacked transmission charges, better coordinating infrastructure planning, and sharing expensive reserve and peaking capacity.

The geographic and natural resource diversity of the West presents an enormous opportunity. The winds of eastern Colorado, the hydropower of the Pacific Northwest, the geothermal of Nevada and the sunshine of California, Arizona, and New Mexico can all together balance out each others’ variability throughout the day and the seasons to deliver the cleanest, cheapest energy to ratepayers in all participating states. AEE has developed a set of principles to inform and guide conversations among Western States as they navigate the inherent difficulties in designing a cooperative governance structure that preserves each state’s authority to set and fulfill its own energy policy priorities.

For a detailed look at the principles AEE has developed for the creation of broader regional wholesale markets in the West, click the button below. We look forward to taking part in future discussions as momentum for regional coordination continues to grow.