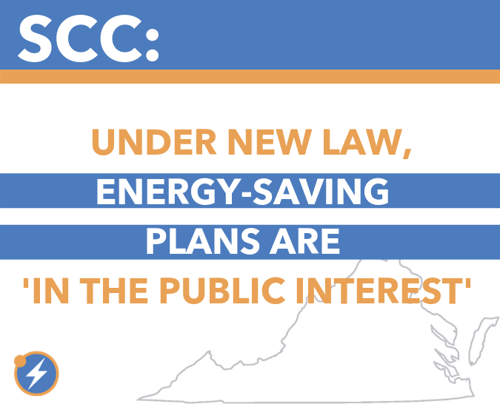 For years, Virginia’s leading investor-owned utility, Dominion, has lagged behind its peers when it comes to investments in energy efficiency (EE). According to the American Council for an Energy Efficient Economy (ACEEE), in 2017 Dominion ranked 50th out of 51 large utilities in EE, narrowly avoiding last place. Those days may be at an end following a stunning decision by the Commonwealth’s State Corporation Commission (SCC) earlier this month approving in full the programs – and budget – for greatly expanded efficiency investments for homes and businesses.

In March 2018, Virginia’s General Assembly enacted SB 966, the “Grid Transformation and Security Act” (GTSA). This expansive legislation, which AEE helped to negotiate and lobbied for its passage, was intended to get Dominion and Appalachian Power to invest in renewable generation, grid modernization, and energy efficiency.

Three provisions were of particular importance for the energy efficiency industry. The first addressed cost-benefit testing. For years, Virginia regulators have overused the Ratepayer Impact Measure (RIM) test, which focused on the cost of EE measures to ratepayers without considering many of their benefits.  As a result, the SCC rejected utility EE programs widely deployed in other states based on other widely accepted cost-benefit measures. The GTSA changed the code, declaring EE programs that passed three of four cost-benefit tests to be “in the public interest.” In other words, regulators could no longer reject programs solely because they failed the RIM test.

The second was a commitment on the part of Dominion. Over the course of a decade, the utility would spend $870 million on utility EE and demand response (DR) programs. Though non-binding, the commitment represented a significant increase in the utility’s EE investment from prior years. The third established a stakeholder process to inform the development of utility EE and DR portfolios.

The GTSA was a big win for the advanced energy industry, and marked a turning point in Virginia. But the question remained: Would the act deliver on its promise?

In October of 2018, shortly after the GTSA went into effect, Dominion filed its proposed portfolio of demand-side management (DSM) programs. The utility proposed 11 new EE and DR programs, including residential customer engagement, smart thermostats, and lighting systems and controls. In total, Dominion proposed spending almost $226 million on these programs over five years.

The DSM proposal broke new ground for the utility, both in the range of new programs proposed and the investment behind them. It was the first concrete evidence Dominion would follow through on its $870 million commitment. Would state regulators follow suit?

Early signs were not encouraging. In February, Commission staff filed comments regarding Dominion’s proposed portfolio. Stating that they lacked confidence that many of the programs would be cost-effective, the staff recommended, if not outright rejection, then limiting the duration of programs. Virginia AEE, in coordination with member companies, pushed back, noting in public comments the success of such programs in other states and critiquing the staff’s review. Following a hearing in late March, we held our breath.

On May 2, we got our answer. In a remarkable outcome, the Commission approved all 11 proposed programs for the full term of five years. Rather than segment out program budgets or cut them – as it had done in prior rulings – the SCC authorized the full $226 million budget for the portfolio.

In their decision, the Commissioners made specific reference to the GTSA:

“Senate Bill 966… mandates that any energy efficiency program passing three of four specific cost-benefit tests must be found to be ‘in the public interest’ and approved by this Commission. Dominion’s proposed Phase VII programs pass three of the four tests; therefore, the law has pre-determined that these programs are in the public interests and that they shall be approved.”

After years of regulatory and legislative battles, EE and DR prevailed!

Sweet as this victory may be, now is not a time for the EE industry to rest on its laurels. That’s why Virginia AEE is working to lock in gains from the GTSA.

On the legislative front, this February Virginia AEE and other EE champions helped to pass legislation that increases transparency at the SCC and deters the Commission from cutting program budgets. We also successfully lobbied for a bill to ensure the stakeholder process established in the GTSA continues through 2028. Together, these measures should help ensure that Virginia remains open to the EE and DR industry.

Beyond the General Assembly, work remains. This year’s $226 million represents only a quarter of the $870 million Dominion has committed to spend on EE by 2028, so there’s significant room to grow. To guide that growth, Virginia AEE will continue to participate in the stakeholder working group established by the GTSA, steadily pushing the utility to invest more in existing programs, and establish new ones. At the same time, Dominion has started the process of developing its 2019 DSM portfolio, recently issuing an RFP that will inform their October DSM filing. We would encourage member companies to engage in both the stakeholder process and the RFP.

Virginia’s market for EE and DR has grown by leaps and bounds in the past year.  The SCC’s decision – one step toward expanding the EE market opportunity in Virginia by $1.3 billion, based on AEE estimates – is evidence that it could be here to stay. And with the continued engagement of AEE and the EE industry broadly, it will be.