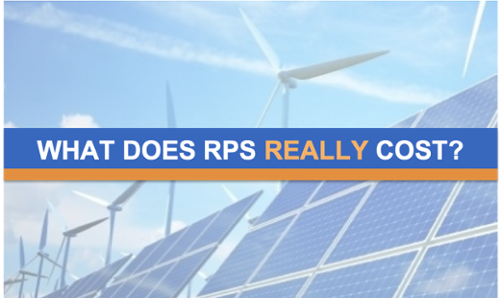 A new working paper from the University of Chicago’s Energy Policy Institute is creating a bit of a stir. It concludes that one of the most popular, successful, and common state-level renewable energy policies – Renewable Portfolio Standards, or RPS – is far more expensive than previously believed. But there are reasons – multiple, in fact – to take the authors’ provocative conclusion with a grain of salt. So, too, their implied alternative, which would be to take a policy that seems to be working in 29 states and replace it with one that has nowhere been implemented on a scale sufficient to change the electric power mix as much as the RPS targets now being adopted by states around the country.

Although RPS programs differ considerably in their details, an RPS basically imposes a binding requirement that retail electricity providers sell electricity with a specific percentage of renewable energy, typically increasing gradually, year by year, or moving toward a fixed target by a certain date. The working paper claims, by analyzing retail electricity rates and other state-level data, that RPS programs, on average, raise retail rates by 11% (or about 1.3 cents/kWh), seven years after introduction, and by 17% (2 cents/kWh), 12 years after introduction. The price impacts at year seven correspond, according to the authors, to a net increase of 2% in the renewable energy content of electricity. A related finding, not surprisingly given this primary conclusion, is that RPS is an expensive policy for achieving carbon reductions (the only benefit the working paper considered).

The results of the working paper have been met with both praise and skepticism, including some excellent commentary in a meaty Twitter thread by Harvard University’s Jesse Jenkins (yes, Twitter – welcome to peer review in the 21st century!). After reading the working paper and much of the commentary on it, we urge you to use the paper with extreme caution, or better yet, don’t use it at all until it can be properly peer reviewed. Here are just some of the reasons:

Given the body of literature on RPS costs and benefits (here’s one example from two national labs) it would be hard to argue that the policy has not added something to retail electricity prices. At the same time, the authors make arguments (in the Research Summary, not the working paper itself) that other policies, and specifically a carbon tax, would be more economically efficient. This is also likely true. But passing those types of policies at the levels of carbon pricing needed to drive change in the power mix has proved extremely difficult. And, in the absence of a policy as simple and elegant (to an economist, anyway) as a carbon tax or similar policy, an RPS does encourage competition (at least among eligible technologies) to help drive down costs.

The authors of this working paper have raised some very interesting and important questions, but clearly much more work is needed. In the meantime, RPS marches on, with several states recently ratcheting up their RPS targets or passing ambitious Clean Energy Standards, including several targeting 100% clean grids by 2050 or sooner.