The biofuels market in the United States is primarily driven by the Renewable Fuel Standard (RFS). While Congress set the original targets in 2007, the U.S. Environmental Protection Agency (EPA) sets the final mandate for each calendar year to adjust for market conditions. In 2016, the EPA expanded the biofuels market by nearly 1.2 billion gallons for 2016, and another 1.17 billion gallons for 2017 across the four major renewable fuel categories: advanced biofuels; biomass-based diesel; cellulosic biofuel, made from cellulose or lignin; and “renewable fuel,” primarily corn-based ethanol, the largest category. 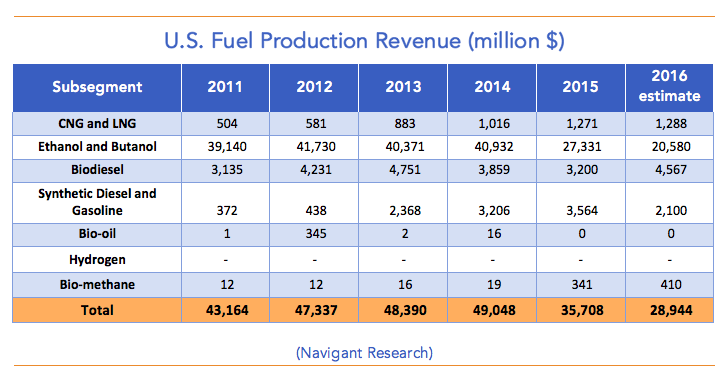 The higher 2017 target for ethanol is supported by U.S. DOE data, which shows that gasoline consumed in 25 states and the District of Columbia contained more than 10% ethanol on average in 2015. Prior to this, the market had run up against the “E10 Blend Wall,” a technical limitation for cars produced prior to 2001 that had set a limit on RFS volumes as gasoline consumption declined amid fuel economy increases.

The ethanol industry had pushed for E15 to become the new standard, but automakers claimed that earlier models could be harmed by the higher ethanol content. As cars produced prior to 2001 become more rare on U.S. roads, the E10 Blend Wall will be less of an obstacle to ethanol use. According to the Renewable Fuel Association (RFA), fueling station companies such as Sheetz, MAPCO Express, Protec Fuel, Murphy USA, and others now offer E15 to 2001 and new vehicles at several stations today. Over the next 12 months, nearly two thousand stations are expected to come online thanks to USDA grants and ethanol and agricultural subsidies. But U.S. revenue from corn-based ethanol continues its decline, falling from $39 billion in 2014 to $27 billion in 2015, and then to an estimated $20 billion in 2016. Global wholesale ethanol prices were down 20% in 2016, reaching an average of $1.50 per gallon, and U.S. prices dropping to an average of $1.40 per gallon in 2016. The price of ethanol is tied to the price of two other resources: oil and crop feedstocks. As a fuel substitute, the price of ethanol is highly correlated to the price of gasoline and hence crude oil. The RFA reported in late 2016 that operating capacity of the industry was 15.4 billion gallons per year, meaning the mandate will cover 97% of the capacity in 2017 – high enough to support all of the plants currently operating. This should allow the industry to operate with a healthy margin during 2017 overall, though seasonal swings will occur.