Tour Tells the Story of Wind and Solar Powering Jobs 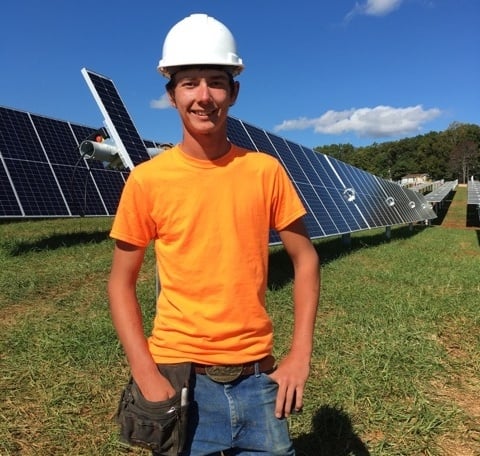 This is a guest post by Dan Shugar, CEO of NEXTracker, and an AEE board member

Most folks working in the U.S. wind and solar industries already know that both are creating jobs all across the country. These industries now employ over 360,000 workers, and have the two fastest growing job categories in the nation: solar photovoltaic installers and wind turbine technicians, according to a US Department of Labor report released earlier this year. Over the next 10 years, the demand for the two positions is set to essentially double. But data points alone are not always enough to convince the public and policymakers about the tremendous job creation of these sectors. That’s why, earlier this fall, the American Wind Energy Association (AWEA), the Solar Energy Industries Association (SEIA), the Wind Energy Foundation (WEF), and NEXTracker, Inc. launched the Renewable Energy Jobs Tour.

The Jobs Tour is telling this story by featuring growing renewable energy businesses that are contributing toward prosperity in their communities. The tour has already held four events this year so far, in Michigan, Virginia, Iowa, and Ohio, with more in the works

At the next event in Bedford, Va.,, economic development, legislative, and business leaders, joined together for a tour of a 3-megawatt Bedford Solar Farm currently under construction. Virginia State Senator Steve Newman, Bedford Mayor Rob Wandrei, and the President and CEO of the Bedford Chamber of Commerce Susan Martin were in among the local notables in attendance. This project, developed by O2 EMC, is located next to an unused brownfield site, and will eventually provide enough power more than 500 homes. The event generated significant local press coverage, including both local broadcast and print.

The campaign’s third event highlighted the solar industry growing in a state known for wind power – Iowa. Solar jobs grew by 15% in the state from 2015 to 2016, and companies like Ideal Energy, based in Fairfield, are helping lead the way. That’s why Iowa Gov. Kim Reynolds and Lieutenant Governor Adam Gregg joined Ideal Energy on a tour of one of their installations, at Schaus-Vorhies Manufacturing in Fairfield. The Governor and Lt. Governor got to see firsthand how these growing companies are employing Iowans and using solar to reduce costs.

The campaign’s most recent event was held in Cleveland, at Talan Products, a metal stamping company that supplies the solar industry. Talan employs 80 workers and is one of the fastest growing inner-city businesses in the nation. One-third of Talan’s business is with the solar industry, and it’s growing. The company may add another 20 employees in the coming year to accommodate additional orders. U.S. Rep. David Joyce (OH-14) and State Rep. Dave Greenspan toured the facility with Talan’s CEO and the CEO of Wire-Net, an association of Ohio manufacturers that includes wind supply chain companies. For both wind and solar, the jobs story reaches all the way up the supply chain.

This is just the start for the Renewable Energy Jobs Tour. By showing the public, media, and elected officials the positive impact renewable energy is having in their neighborhoods, the campaign is demonstrating that these technologies are delivering the job creation that our country needs. And at a time when policies that support renewable energy are under attack, it is more important than ever that these stories reach these key audiences.

To host an event, or follow the upcoming events, please visit www.arenewableamerica.org.

Wind and solar are just part of the $200 billion advanced energy industry, which supports more than 3 million U.S. jobs. Learn all about it in the Advanced Energy Now 2017 Market Report.