Awards Season — Not Just for the Movies 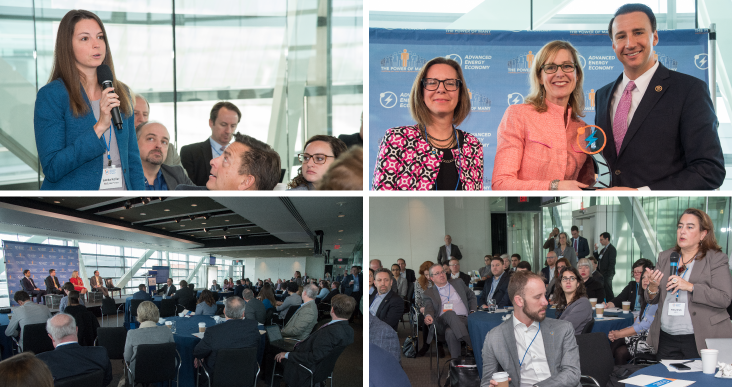 Hollywood has the Oscars, the Golden Globes, the Emmys, and more, but the advanced energy industry has its own stars to celebrate, too! With awards season in full swing, last week, we recognized Representative Ryan Costello (R — PA, 6th District) with AEE’s Advanced Energy Leadership Award during Energy Forward: Driving Advanced Energy Growth, our annual gathering of AEE members and state and regional partners, Feb. 27-28. A theme that emerged throughout the two days was the need to more effectively share our stories. Just as the film industry looks to tell stories that make characters relatable, we need to tell stories that connect our industry — and the individuals within it — to the broader economy. We need to boost our ratings by making advanced energy hyper-local, highly relatable and personal.

END_OF_DOCUMENT_TOKEN_TO_BE_REPLACED

How Many Americans Does It Take to Change a Light Bulb? (Hint: More Than You’d Think)

Earlier this year a group of national, regional, and local energy efficiency pros met to decide what we should ask people to do to make the greatest impact on energy efficiency across the United States. What is the big, bold action we are looking for to show people how to save energy and save money? What is the cutting-edge technology that we should urge people to adopt to slash their energy usage? It turns out that the best ask today is the old ask: Change a light bulb. So that’s what the Energy Efficiency Communicators Network, of which AEE is a member, is going to do for this year’s national Energy Efficiency Day, which is planned for October 5. Because it turns out that there are a lot of old light bulbs still burning, and wasting energy, out there.

END_OF_DOCUMENT_TOKEN_TO_BE_REPLACED A Microsoft datacenter in Quincy, WA.

Advanced energy is a $200 billion industry in the United States that supports more than 3.3 million American jobs, as detailed in the new report Advanced Energy Now: 2017 Market Report. Earlier this week, Microsoft invited AEE, as well as other industry groups such as Edison Electric Institute, Northeast Clean Energy Council, and Michigan Energy Innovation Business Council, and executives from SunPower and Direct Energy, to discuss the power of the advanced energy industry to drive economic growth.

END_OF_DOCUMENT_TOKEN_TO_BE_REPLACED

Energy Policy, Politics and the 2016 Election was the topic of an exciting panel at the annual conference of NECEC’s national partner Advanced Energy Economy this week. The panel, moderated by AEE VP of Communications Bob Keough, featured a conversation with national energy media veterans Amy Harder of the Wall Street Journal, Rod Kuckro of EnergyWire News, Matt Daily of Politico and Mark Drajem of Bloomberg News, who discussed the prospects of the Bipartisan Energy Legislation in Congress, the impact of the recent stay issued by the Supreme Court on the Clean Power Plan, energy issues in the 2016 presidential race and more.