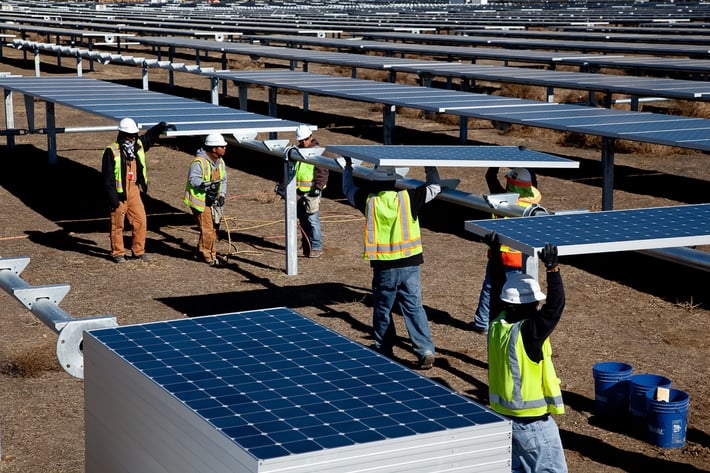 Solar photovoltaic (PV) power systems convert sunlight directly into electricity. PV modules (panels) produce direct current (DC), which is converted to grid-compatible alternating current (AC) through an inverter. Utility-scale PV installations are typically connected to the transmission grid, and range from about 1 MW to several hundred MW. Since PV can make use of diffuse or direct sunlight it can be installed anywhere. The majority of large solar farms use ground- mounted at-plate PV panels, which can be installed at a fixed-tilt or can use single-axis or dual-axis tracking systems that follow the sun. Tracking increases electricity production over the course of the day, but also increases costs. Concentrating PV (CPV) is a variation on at plate PV that uses arrays of lenses mounted in front of small PV cells to concentrate the sunlight reaching the cells. CPV requires dual-axis tracking and is more efficient, but more expensive, than regular at plate PV, so it is best suited to very sunny locations.

Installed large-scale PV capacity in the United States reached over 11 GW by July of 2015, with a record 3.9 GW installed in 2014 alone. New facilities include two of the world’s largest solar projects, the Topaz and Desert Sunlight Solar Farms by First Solar in California, each with a capacity of 550 MW, enough to power approximately 160,000 homes. Recurrent Energy began installing a 150 MW plant in Texas, which will be that state’s largest solar plant. While dry and sunny states are ideal for solar power, utility-scale installations are widely deployed in markets across the country, with North Carolina ranking second behind California for utility-scale installations in 2014. When completed in 2016, the 156 MW Comanche Solar project in Pueblo, Colorado, built by SunEdison and managed by Renewable Energy Systems (RES) Americas Inc., will be the largest solar project east of the Rocky Mountains.

Large-scale solar power represents a significant and growing source of domestic economic activity. Installations brought online in 2014 alone represent a total investment value of about $8 billion, boosting local businesses and tax revenue. At a broader level, job creation in the solar industry has expanded at or near 20% annually since 2010, reaching nearly 174,000 workers in 2014 and far outpacing job growth in the U.S. economy. Prices of power purchase agreements (PPAs) for solar-generated electricity have fallen by more than 60% in the past six years, from an average of $175/MWh in 2008 to $50-$70/MWh in 2014, making electricity from utility-scale projects broadly competitive with other new sources of generation. In 2015, Austin Energy received bids for over 1 GW of solar capacity below $40/MWh. Because solar generation is not subject to fuel costs and has very low operating and maintenance costs, prices will continue to fall as deployment increases and the technology advances. Already, the proliferation of solar energy has developed alongside a number of tools and techniques that enable utilities and grid operators to integrate high levels of solar generation without compromising reliability.

Learn more about solar energy, and all aspects of the advanced energy economy, in This Is Advanced Energy, a report out from AEE: