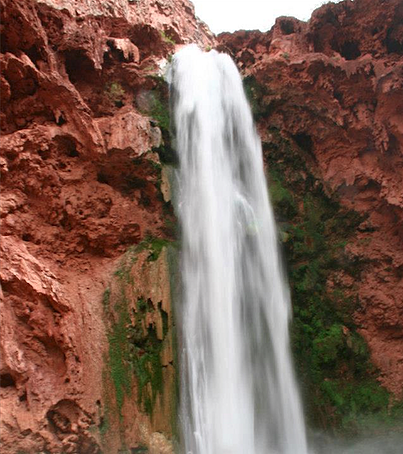 There’s a saying in the West: “The whiskey’s for drinking and the water’s for fighting.” As evidence has mounted that existing interstate compacts for water transfers from upstream states to downstream states were struck during historically wet years, concern has grown over water shortages due to changing climate conditions. As a result, states in the Southwest, especially, have begun to examine the nexus between water consumption and energy.

In addition, U.S. EPA now requires that at least 10 percent of the federal funds for each state’s Clean Water State Revolving Fund for wastewater treatment infrastructure go into a “green project reserve” to pay for investments that demonstrate 20 percent savings in energy usage, as well as other “environmentally innovative” projects.

The second, and more predominant, aspect of the energy water nexus is in the amount of water used in the generation of power. Thermal technologies such as coal, nuclear, geothermal and solar thermal rely upon water for cooling, in vast amounts in some cases(the towers at coal plants are actually cooling towers that are emitting steam). In contrast, wind turbines and solar PV don’t use any water at all. Hydropower depends on water, of course, but does not consume it. Changes in climate and weather (i.e., amounts of snow and melt) have an impact on reservoir capacity for large hydro facilities.

This chart highlights the amount of water used in various power generation methods: 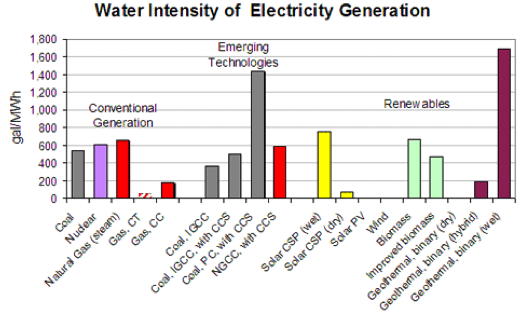 A study by Western Resource Advocates found that in the Colorado River Basin – the area responsible for delivering much of the water to Arizona, California, New Mexico, Nevada, Colorado and Utah – energy generation uses over 167,000 Acre Feet of water each year.

Most western states operate under a system of prior appropriation, or “first in time, first in right.” Senior water right holders are able to put a “call on the river” and use their full allocation, forcing junior right holders to curtail water use, when there’s not enough water available for all.

With the energy water nexus becoming more clear, water is becoming a significant factor in integrated resource planning. In its 2014 IRP, Arizona Public Service noted “the importance of water in its resource planning process, and…the importance of water as a resource in Arizona.” Accordingly, the utility is now “assuming dry-cooled or hybrid cooled technology” for any new natural gas-fired generation, and quantifying water consumption for all its generating assets. With projected growth in natural gas, solar, and energy efficiency resources, APS predicted it would use 24 percent less water per megawatt-hour of electricity generated by 2029.

State public utility commissions are now beginning to address water consumption in electricity generation and consumption in integrated resource planning. Arizona, for instance, adopted a policy in 2010 that load-serving entities are required to file water consumption quantities and rates on a yearly basis for each generating unit and purchased power contract and are also required to file yearly prospective analyses and plans for reducing water consumption.* If less water is used in electricity generation – and less electricity has to be generated to move and treat water – junior water right holders will suffer less during low water years.  That would be good news for downstream farming interests that rely upon irrigation for their livelihood.

*The regulations can be found here in the Arizona Administrative Code: Title 14, Chapter 2, Article 7, “Resource Planning and Procurement,” sections (B)(1)(q) and (D)(17) respectively.

Get the latest advanced energy news, from policy to industry and everything in between, delivered to your inbox every Friday. Click below to sign up for AEE Weekly.