STATES: Oregon Makes A Deal with Co-ops on RPS 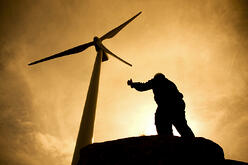 In 2007, the Oregon legislature passed SB 838 establishing the state’s renewable portfolio standard (RPS). Up to that time, Oregon had installed a little more than 400MW of wind power.  Last year, that number had increased to more than 2,500 MW of wind power – principally due to the RPS.

Yet, in Eastern Oregon there was pushback against the renewable requirements from some of the state’s cooperative utilities. Specifically, the Umatilla Electric Cooperative was concerned that rising demand from new data centers located in its service territory would drive the co-op into the “large utility” category – greatly increasing their RPS requirements.  The rural utility started gathering signatures for a ballot initiative that would change the law to count existing hydropower toward the renewable standard – rendering the RPS useless in supporting new resources.

The threat of a 2014 ballot question brought together Gov. Kitzhaber’s energy director, Margie Hoffman, and the district’s state representative, Rep. Greg Smith (R), to find a solution that would protect the state’s RPS and address the concerns of Umatilla Electric.

The result is HB 4126, which passed the legislature last week. The bill allows cooperatives to meet RPS requirements by purchasing RECs (Renewable Energy Credits) on the open market, rather than as part of purchasing the power associated with those RECs, greatly reducing the cost of compliance for co-ops. (Previously, purchase of such “unbundled” RECs was allowed only for a portion of the RPS obligation on larger utilities.) Whether the law does much for consumers, however, remains to be seen. In recent years, wind power has been priced lower than other sources of electric power. If co-ops opt to buy more expensive conventional power to meet load growth and then purchase RECs simply to comply with the RPS, that may end up costing consumers more than if the co-ops directly contracted for new wind development.

Subject to the results of this study, the bill gives the PUC authority to allow such voluntary renewable energy offerings from electric companies, with all costs and benefits of the offerings to be paid by the non-residential customer.

While changing the RPS standard for co-ops doesn’t increase advanced energy opportunities for growth, the compromise does protect a growing market for the rest of the state – and expanding the unique competitive market in Oregon to nonresidential customers may signal a change that could ultimately lead to greater market penetration for advanced energy providers.

Get all the latest news on advanced energy policy in states and on the national scene by signing up for AEE's weekly newsletter. Click below to subscribe!