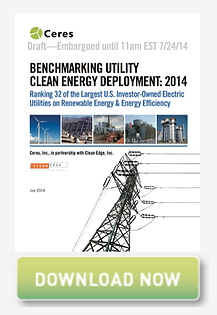 As the U.S. Environmental Protection Agency (EPA) prepares for July 29-Aug 1 listening sessions on its Clean Power Plan for existing power plants, a new report from Ceres and Clean Edge ranks the nation’s largest electric utilities and their local subsidiaries on their renewable energy sales and energy efficiency savings. The report finds that an increasing number of utilities are deploying lower carbon fuel sources, and that state policies can be a key driver in that performance.

The report, Benchmarking Utility Clean Energy Deployment: 2014, is the first of its kind. Although agencies such as the Energy Information Administration put out state-level clean-energy capacity and generation data, deployment data at the utility level has been scarce or difficult to find.

“State and local governments, large corporate and industrial users, and individual customers are increasingly demanding low-carbon, clean-energy sources,” notes Clean Edge Managing Director Ron Pernick in the report. “Tracking the performance of utilities against this backdrop is critical to understanding how policies, market frameworks, and new economics are impacting the future of electricity generation and consumption.”

The report ranked the 32 largest electric utility holding companies, which collectively account for about 68 percent of 2012 U.S. retail electricity sales (the most recent full year for which data was available), on three clean-energy indicators:

Among the 32 holding companies, NV Energy, Xcel, PG&E, Sempra, and Edison International were found to rank the highest for renewable energy sales, with renewable resources accounting for nearly 17 to 21 percent of their retail electricity sales in 2012.

These top-performing utilities are located in, not surprisingly, states and regions that lead in clean-tech activity. PG&E’s home state California—which has an RPS target of 33 percent renewables by 2020—ranked first in technology, and second in both policy and capital, according to the recently released 2014 Clean Tech Leadership Index (which tracks activity across all 50 U.S. states and the top 50 metro regions). Xcel’s top three states of operation, Colorado, Michigan, and Minnesota, are place in the top 20 for clean-tech leadership. Nevada, home of NV Energy, is fifth in the nation for solar PV capacity.

Similarly, utilities perform well in Massachusetts, Oregon, and Connecticut—states with strong policies, and all of which rank in the top ten states in Clean Edge’s 2014 U.S. Clean Tech Leadership Index.

Most of the utilities with weaker deployment of clean energy (Southern, Entergy, SCANA, Florida Power and Light, and Dominion) are located in the Southeast, which historically has had weak state level support for clean energy, and perform near the bottom of the pack in Clean Edge’s state rankings.

The report found a wide range of utilities’ performance, even among those in similar market and regulatory environments. This suggests that strong state-level polices are not the only factor in utility investment in clean energy. For example, in Ohio, Duke Energy has delivered more cumulative energy savings than other utilities in the state, and in Oklahoma, AEP’s subsidiary has delivered more renewable energy and energy efficiency than OGE Energy’s.

“The electric utility industry is entering a period of major transformation as it moves from a rate-regulated industry of monopolies to a market-based competitive system driven by consumer choices,” explains Jon Wellinghoff, Partner at Stoel Rives LLP and former Chairman, Federal Energy Regulatory Commission, in the report’s forward. “Ignoring this clean-energy shift is dangerous for both the traditional utility business and the environment.”

As we’ve long said at Clean Edge, benchmarking is key to industry transparency. And such data and analysis will be increasingly important as the shift towards clean energy intensifies.

Clean Edge’s Senior Analyst James Belcher covers clean-tech markets, researching and writing for the firm’s reports and consulting projects. This post was originally published at CleanEdge. Email him at belcher@cleanedge.com and follow him on Twitter at @JamesLBelcher.