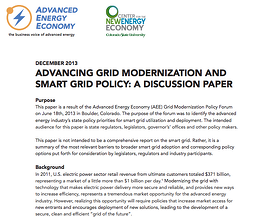 In 2008, Massachusetts Gov. Deval Patrick signed the Green Communities Act, a comprehensive energy reform law. Six years later, Massachusetts has enjoyed the fruits of that leadership, being cited three years in a row as the top-rated state in the country for energy efficiency by the American Council for an Energy Efficient Economy.

At the end of December, the Patrick administration delivered another energy-policy tour de force.  The Department of Public Utilities (DPU) – the Commonwealth’s public utility commission – issued a sweeping order to modernize the utility system. The impact of that order in changing the way electricity is distributed and the way investments in the power grid are authorized may ultimately be as great as the Green Communities Act itself.

The DPU order is the latest step in a long process that began with a Notice of Investigation (NOI) into grid modernization issued by the DPU. The working group that grew out of this NOI consisted of 125 stakeholders, including AEE’s Partner in the region, the New England Clean Energy Council (NECEC), represented by VP of government affairs Janet Besser, a former utility commissioner.  The working group issued its comprehensive stakeholder report in July 2013.

The working group was asked by the DPU to address four goals:

After review of the working group’s report, the DPU issued an order to implement many of its recommendations, ushering in a new era of utility intelligence that will facilitate all sorts of advanced energy technologies and services.

The order described the purpose of modernizing the grid this way:

"The modern grid will enhance reliability and resiliency in the face of increasingly extreme weather and allow for much more efficient utility operations. We also see grid modernization as an important means for advancing the statutory directives and policy goals of an electricity system that can support further development of energy efficiency, demand response, distributed generation, storage, electric vehicles (“EVs”), renewable energy resources and innovations that we have yet to imagine. The modern grid will empower customers with greater choices for using electricity and will provide opportunities for reducing costs."

Under the order, the DPU required the state’s four investor-owned electric utilities to submit a Grid Modernization Plan (GMP) within six months and implement the plan within three years.

Included in each GMP will be a Comprehensive Advanced Metering Plan (CAMP). The DPU asserts that advanced metering is a critical component of modernizing the grid: “Advanced metering functionality is a basic technology platform for grid modernization that must be in place before all of the benefits of grid modernization can be fully realized.” The DPU specifies that the CAMPs should consist of:

The CAMP must also address a number of the issues identified in AEE’s policy paper on Advancing Grid Modernization and Smart Grid Policy, including the need for robust consumer engagement.  The DPU order states: “Educating customers about changes to their meters, electric bills, and price offerings is a core component.”

The Massachusetts DPU is not done shaking up the utility system. Rather, it is moving toward a larger reconstitution of the utility business model, with the DPU determining to investigate further such elements as time varying rates, cybersecurity, privacy, and consumer access to meter data. In fact, a second order, opening a proceeding to consider how best to facilitate electric vehicle charging infrastructure, was issued simultaneously.

DPU Commissioner David Cash summed up the DPU’s action this way: “With this Order, we require the electric utilities to adopt a new business model that is more forward thinking, and it encourages the continued expansion of clean energy technologies like solar, wind, storage and electric vehicles.”

As this process goes forward, Massachusetts will continue to be a state to watch.