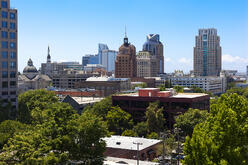 The American Council for an Energy Efficient Economy (ACEEE) has issued its seventh annual ranking of states based on energy efficiency policies and programs. Three years ago, Massachusetts dethroned the perennial leader – California – and has retained the top spot once again.

In looking at the top five states – Massachusetts, California, New York, Oregon, and Connecticut – the most variation is in CHP and Appliance Efficiency Standards.

For CHP, Massachusetts leads the pack. ACEEE recommends, based on the Massachusetts example, that CHP be categorized as an efficiency resource – treated the same as other efficiency resources. Many other states simply establish CHP as an “eligible” technology relegated to a lower tier. Massachusetts, most notably, established specific methodologies for counting CHP contributions toward energy efficiency targets. Massachusetts also had what ACEEE called the “best example” of how to support CHP – the state’s Alternative Energy Portfolio Standard, which provides RPS-like incentives on a smaller scale. Connecticut, which has prioritized CHP and microgrids since the October 2011 snow- and ice-storm that resulting in weeks-long power failures, scored second in CHP.

Massachusetts was head and shoulders above other states in Utility & Public Benefits as well. This is a result of the “Green Communities Act” passed in 2008, which vaulted Massachusetts to a leadership position in advanced energy. The GCA established energy efficiency as the “first fuel” not just in rhetoric but in state statute. It established an Energy Efficiency Advisory Board to ensure that utilities were instituting the most effective efficiency programs available. Three-year time horizons were established to allow efficiency programs time to work, combined with the most aggressive energy efficiency resource standards in the country.

In other noteworthy ACEEE rankings, Illinois broke into the Top 10 for the first time. The most-improved states in this year’s rankings were Maine, Kansas, Ohio, West Virginia, and Mississippi – the latter state also among those most in need of improvement, showing that it’s possible to be at the bottom yet rising fast.