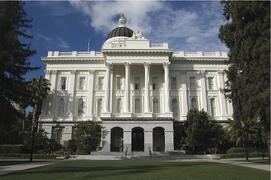 The California State Legislature adjourned last week, sending a number of bills to the Governor’s desk that are supported by AEE. Lawmakers showed their support for a variety of proposals ranging from incentives for advanced vehicles and fuels to community solar to rate reform. With three wins in California, the state legislation victories for advanced energy continue to pile up: 59 total!

Whereas much of AEE’s state policy work is done in collaboration with state and regional partners, in California AEE speaks for itself. This gives the advanced energy industry direct representation in the biggest state – and market – in the country, and also makes AEE a partner in the State Coalition promoting advanced energy in state houses across the country. We are all working hand-in-hand to accelerate advanced energy growth.

In a major victory for California’s advanced transportation industry, the California legislature passed AB 8, authored by Assembly Members Henry Perea and Nancy Skinner and co-authored by Senator Fran Pavley, with a two-thirds, bipartisan vote. The bill extends the vehicle registration fee to fund low emission vehicle incentives and advanced transportation projects until 2024. It also requires the California Energy Commission to fund the development of up to 100 hydrogen fueling stations in the state.

Solar also gained support with passage of SB 43 (Senator Lois Wolk). Supported by a broad range of organizations, including AEE, the bill creates a voluntary statewide green tariff program that enables customers such as renters and small businesses to purchase electricity from renewable energy facilities. It establishes a 600MW pilot program, expanding choice for customers and setting the stage for the expansion of shared renewables statewide .

In AEE-supported AB 792 (Assembly Member Kevin Mullin), lawmakers sought to clarify existing language so that all customers of advanced distributed generation sources (biomass, fuel cells, etc.) are exempt from the local utility user tax (UUT).  It further clarifies that those customers who choose to finance their projects through third-party ownership also benefit from the UUT exemption. This simple change will provide consistent application of the UUT on distributed generation sources, irrespective of the financing used.

Finally, AB 327 (Perea) also made it to the Governor’s desk. For some time now, utilities have voiced concern over the potential for cost shifts with an increased number of customers opting for solar and other distributed sources of energy. In an attempt to protect ratepayers and prevent future cost shifts, AB 327 gives the California Public Utilities Commission authority to implement a fixed charge of up to $10 per customer for connection to the grid. The charge is aimed to ensure that all customers pay their fair share of the costs associated with maintaining distribution and transmission lines. While a new charge on customers, the bill also paves the way for the CPUC to remove the existing cap on net metering, enabling advanced energy companies to expand their market. In the end, the bill gained passage with support from utilities, consumer advocates, and solar companies, as well as some behind-the-scenes help from AEE. If signed by the Governor, the CPUC will have authority to determine next steps.

California remains an advanced energy leader, and in this session AEE has made its legislative mark.