Photo by vgm8383, used under a Creative Commons license.

With snow seen up and down the East Coast (even in balmy Tallahassee for the first time in 30 years), not to mention the new phenomenon nicknamed “bomb cyclone,” which was both preceded and followed by record cold temperatures, there’s been ample opportunity for energy nerds to see how the grid is reacting to extreme winter weather – and policy wonks to consider the implications for the impending FERC decision on DOE’s proposal for subsidies to existing coal and nuclear power plants on the grounds of “resiliency” in the face of extreme weather events. But for those looking for proof of the need to prop up generating resources that are failing in the marketplace, the winter weather of the past week offered cold comfort.Let’s go to the grid operators! ISO-NE was operating under normal conditions through most of the cold snap, even with some major plants offline last week. PJM itself pointedly tweeted that it had reached the “highest winter load since 2015” but are “not experiencing any reliability issues across the RTO.”

Some observers are noting that coal is making up a larger share of the generation mix in PJM, while others express alarm that the price of natural gas on the spot market spiked to $175/MMBtu. This leads us to only one conclusion: Markets are functioning as intended. In a situation where natural gas and renewable generation is maxed out, the market then turns to the next least expensive options for generation, which include coal, oil, and nuclear power. In ISO-NE, oil-fired generation is up also because of increased dual-fuel capacity incentivized by the grid operator following the Polar Vortex of 2014 to protect against supply constraints when natural gas is prioritized for space heating. While the day-ahead natural gas prices are increasing due to soaring demand, futures prices remain fairly steady, around $3/MMBtu, according to Financial Times, suggesting no long-term consequences for electric power prices.

Secretary Perry used the 2014 Polar Vortex as justification for much of the DOE grid resilience Notice of Proposed Rulemaking (NOPR), so politicos and pundits all over the country were pointing to the current “bomb” as a test case for whether the NOPR is needed. With the grid generally holding up, some view it as a repudiation of the Secretary’s assertion that our generation mix needs to be more baseload-heavy to survive extreme weather events.

As noted by PJM, among others, in comments to FERC on the NOPR, transmission and distribution, not generation, are generally the biggest threats to grid resilience. ISO-NE saw this on Thursday – the 688 MW Pilgrim Nuclear Plant in Massachusetts shut down due to a power line failure. Still, ISO-NE was able to deliver sufficient power to the region by increasing the shares of hydro, renewable, and gas generation. 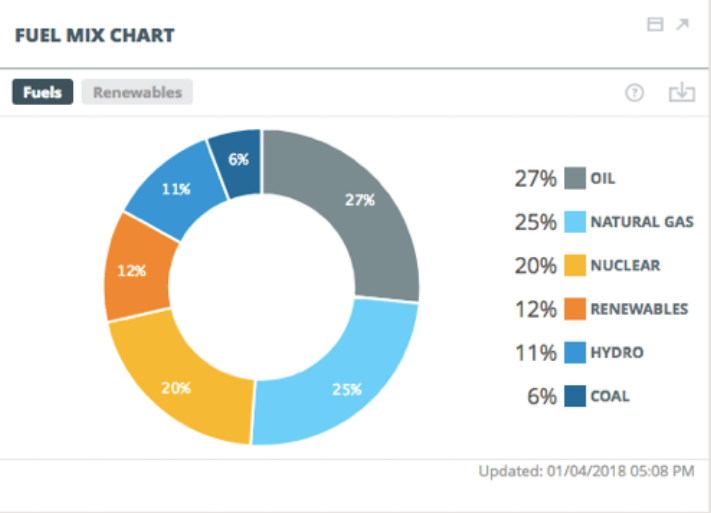 Meanwhile, throughout the week, advanced energy technologies contributed to blackout prevention. Renewable energy contributed more than 10% of the power in ISO-NE on Thursday, while renewables and hydro power together made up nearly a quarter of all generation in the region, similar to oil, natural gas, and nuclear. Demand response continues to play a major role in PJM, although the capacity performance changes enacted last year (leading to less DR clearing the 2020-2021 auction) puts into question how PJM will replace this reliable source during future extreme weather events.

Bottom line: Extreme weather events challenge the power grid in multiple ways, but with the range of resources and technologies available, all under the steady hand of grid operators who have seen it all before, coal and nuclear plants with onsite fuel supplies are no silver bullets in need of a gold-plated handout, at consumer expense.