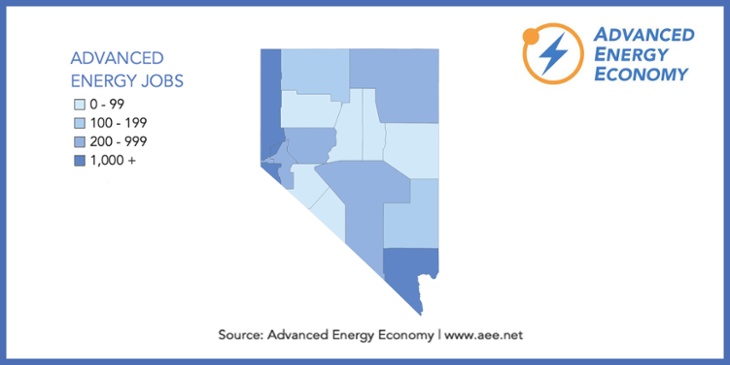 While Governor Sisolak and the State Legislature were hard at work passing policy after policy to make Nevada one of the best places in the country to invest in advanced energy, the latest employment figures showed what a strong industry base Nevada has to build on: 33,900 advanced energy jobs in 2018, with employers predicting further growth of 7% for the year now coming to a close. What’s more, advanced energy jobs increased a whopping 31% in Nevada from 2017 to 2018, 10 times the rate of overall job growth in the state and far faster than any other state where AEE has reported employment. That should win the Silver State a Gold Medal!

Advanced energy has become a significant industry in Nevada, with more jobs than in real estate and more than double those in mining. These jobs cross technologies, services, and geographies, as all four corners of the state see opportunity and potential. Blessed by an abundance of valuable natural resources, Nevada is capitalizing on its sunshine, geothermal heat, hydropower, wind, and lithium resources as the market grows for cleaner electric power and transportation systems.

Advanced electricity generation is providing Nevadans with the most jobs – 12,400 total, almost 9,800 of which are in solar – while 11,200 workers are helping homes, offices and industries save both electricity and money. But the real story is the growth of jobs in battery storage – 8,322 in 2018, up from 1,397 in 2017.  The bulk of the 6,725 new jobs in battery storage were associated with Gigafactory 1, Tesla’s battery and electric vehicle subassembly plant near Reno. But with states and utilities around the country continuing to set ambitious storage targets, improving economics, and growing interest in co-locating advanced generation technologies with storage, Nevada finds itself on the cutting edge of a market trend.

Just last week, an additional 1,190 MW of solar co-located with 590 MW of battery storage was approved by the Public Utilities Commission, giving the green light to three NV Energy projects (two of them to be developed by AEE member companies, EDF Renewables and 8minuteenergy) that will create more than 3,000 union jobs. Now with an ambitious new Renewable Portfolio Standard target of 50% by 2030 and Governor Sisolak’s recent Executive Order announcing his intention to strengthen vehicle emission standards and promote in-state clean energy economic opportunities, the growth is just getting started.

Heading into the New Year is the perfect time to reflect on the progress we have made in Nevada and where we still have to go. Next, we hope to see the state develop a comprehensive, long term strategy to electrify the transportation and building sectors. By doing so, Nevada can further extend its energy leadership and create even more in-state advanced energy jobs. AEE will be weighing in on critical conversations next year to help make sure that Nevada keeps up the impressive momentum.