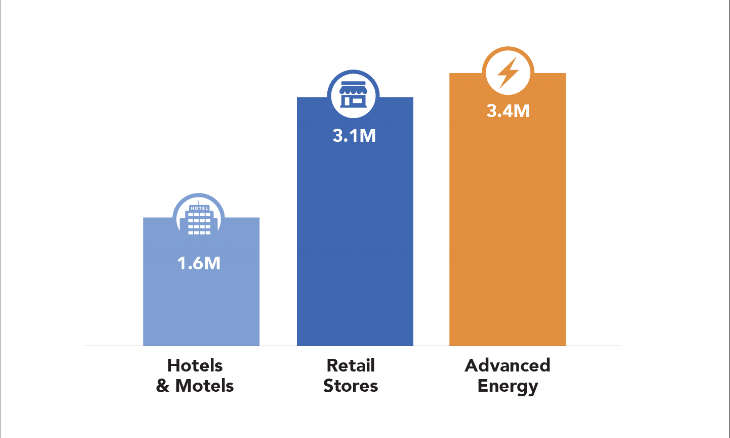 Advanced energy employs 3.4 million workers across the United States, supporting more jobs than retail stores and twice as many as hotels and motels. These are some of the findings of AEE’s analysis of the latest data on energy sector employment. The U.S. Energy and Employment Report (USEER), published this year by the National Association of State Energy Officials (NASEO) and the Energy Futures Initiative (EFI) and last year by the U.S. Department of Energy, is the definitive source of information on energy industry jobs in the United States. But digging into the data underlying the report, in collaboration with labor market research firm BW Research Associates, which administers the nationwide survey it is based on, reveals important trends in the advanced energy industry, which is both growing and changing.

Overall, advanced energy added nearly 50,000 jobs in 2017, for a growth rate of 1.5% over 2016. Employers expect to add even more jobs this year, projecting growth of 7% in 2018, which would bring total employment to over 3.6 million nationally. Based on data from last year’s edition of USEER, AEE found total advanced energy employment to be 3.3 million U.S. jobs in 2016.

Here are the major findings from our review of advanced energy employment, as of year-end 2017: