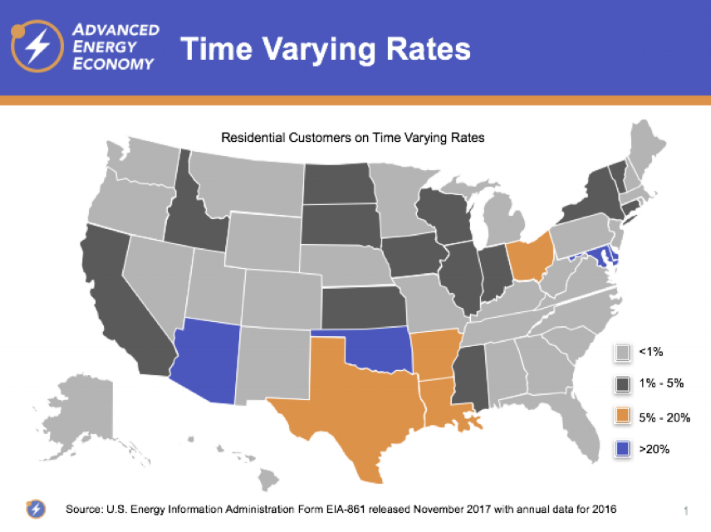 A successful transition to a 21st Century Electricity System requires consideration of a range of issues that will ultimately redefine the regulatory framework and utility business model while creating new opportunities for third-party providers and customers to contribute to the operation of the electricity system. In this fourth in an occasional series published by Utility Dive, AEE looks at the issue of rate design in a changing electric power system .

The U.S. electricity system is changing, driven by technological innovation, increased use of distributed energy resources (DER), and evolving customer needs and preferences. If DER assets are properly integrated into the system, they have the potential to make the grid more efficient, flexible, resilient, reliable, and clean, while simultaneously giving customers greater choices and control over energy use and costs. For this to happen, new rate designs will be needed – and some approaches to new rate design fulfill the promise of a DER future better than others.

In the fast-changing electric power system going forward, rate designs will need to achieve multiple objectives. They will need to allocate costs equitably. They will need to compensate DER customers for the benefits DER provides and properly charge them for use of the grid. And they will need to allow utilities to fairly recover the revenue required to maintain a system that provides safe, reliable, universal electricity service. But with customers more actively engaged with the electric power system, rate designs need to do even more. They need to send appropriate price signals so that customers are motivated to act in ways that benefit themselves and the grid as a whole.

Today, a majority of residential and small commercial customers, or “mass market” customers, are on simple flat-rate pricing, where most costs are collected on a per-kilowatt-hour (kWh) basis, regardless of when consumption occurs. While there are benefits to such a straight-forward rate design for these customers – they are easy to understand and stable – more sophisticated rate designs based on granular and precise price signals are needed to meet both emerging and traditional objectives of rate design.

But not all alternatives to flat-rate pricing accomplish these objectives. For instance, some utilities have recently proposed increasing the fixed charge component of rates to lock in recovery of a larger portion of their costs. But raising fixed charges focuses only on utility revenue collection and does not adequately balance the other goals of rate design, including the customer’s ability to manage their usage based on price signals. This type of rate design discourages investment in energy efficiency as well as distributed generation technologies. By contrast, a minimum bill – which requires customers to pay at least a certain amount every month regardless of their usage – can provide utilities with a baseline level of revenue recovery while ensuring that all customers contribute some amount for their use of the distribution system.

Demand charges, which have traditionally been used just for large commercial and industrial customers, represent another approach proposed for mass market customers by some utilities. Demand charges are intended to better align revenue collection with utility costs, because the utility builds its system to meet its peak demand – both the generation system peak and the local distribution system peak. However, demand charges may be difficult for mass-market customers to understand and respond to. Since the system peak is not known until after the fact, customers may need to use new technologies, such as smart thermostats, or engage services from a third-party provider to successfully manage usage during the system peak. Like fixed charges, demand charges may reduce the incentive for energy efficiency outside of the peak hours. Demand charges also impact the value proposition of distributed generation.

That said, a targeted demand charge, applied only during specified periods known in advance (e.g., a few hours every weekday afternoon during the summer), could provide value to the system while sending better price signals to customers. If implemented for just a certain subset of sophisticated customers it would also open up a market for third-party companies to provide services (e.g., demand response or behavioral analytics) to assist customers in managing their bills. It would also encourage the use of emerging technologies, such as energy storage, in combination with distributed generation.

Broadly speaking, AEE believes that the best approaches to rate design for a DER future include time-varying rates (TVR), which price electricity higher when demand on the system is greater, and tariffs that more precisely monetize the value of DER to the system.

As of  the end of 2016, there were 7.95 million customers enrolled on TVRs across the country. Maryland continues to lead the nation, with over 75% of their residential customers on TVRs. This is largely the result of Baltimore Gas & Electric’s (BGE) highly successful peak time rebate (PTR) program, Smart Energy Rewards.

Other states that have recently begun the move toward TVRs include California, Arizona, Rhode Island, and Minnesota. In December, the three largest California investor-owned utilities each proposed plans (Pacific Gas & Electric, San Diego Gas & Electric, and Southern California Edison) to move to default residential time-of-use (TOU) rates as required in a July 2015 California Public Utilities Commission decision. Tucson Electric Power in Arizona recently received approval for a new optional TOU rate which became the default rate for new customers starting in January 2018, and at the end of November 2017, National Grid in Rhode Island filed a plan to implement an opt-out TVR program by 2022. Xcel Energy joined the movement in November, filing a petition with the Minnesota Public Utilities Commission for a two-year opt-out residential TOU rate design pilot in two communities in the Minneapolis area for a maximum of 10,000 customers.

While ultimately broader than this, the question of how to properly charge and credit DER owners currently gets posed mainly in the context of successors to net energy metering (NEM). NEM is simple to implement and easy for customers to understand. That has made it very effective at supporting adoption of distributed generation (DG), principally small-scale solar. However, in states with higher levels of penetration, NEM raises issues with respect to utility revenue collection and cost allocation, as revenue recovery is shifted onto non-NEM customers.

Fixed charges and demand charges have been proposed by some utilities as ways to address the issues associated with NEM, but these suffer from the shortcomings discussed above. It would be better for successors to NEM to more precisely monetize the value of DG to the system, achieve desired behavior changes and outcomes related to electricity use, and also fairly compensate the utility for the service it provides to DG customers in their use of the grid. Moreover, it is also appropriate to consider changes to NEM compensation that can apply to all DER, and not just DG, to encourage beneficial integration of DG with other DER technologies (e.g., solar plus storage, or combined heat and power plus demand management).

One potential framework, based on a “value stack,” is being implemented in New York, on an interim basis, primarily for the burgeoning community solar market there and certain behind-the-meter projects for customers that are already on demand-based rates. Specifically, the value is based on the utility’s avoided costs plus other DER values, including wholesale energy and capacity, distribution, and environmental values. It also includes a transitional charge designed to decline over time as DG deployment rises.

Developing new rate designs to make the most of the proliferation of DER will likely be pursued by utilities and regulators differently in different states. Quite apart from the specifics of rate design options, there are certain guidelines to keep in mind while proceeding toward new rates for a DER future:

New technologies, changing consumer preferences, and the growth in customer-sited DER are fundamentally changing how customers interact with the grid and how utilities recover their revenue requirements. As DER deployment and use increase, DER can play a positive role in transforming our electric system to make it more flexible, resilient, and clean. It is imperative to design rates that can better accommodate and integrate DER and send more accurate price signals to customers so that their choices lead to beneficial outcomes for all who depend on the electric power system.