A successful transition to a 21st Century Electricity System requires careful consideration of a range of issues that will ultimately redefine the regulatory framework and utility business model while creating new opportunities for third-party providers and customers to contribute to the operation of the electricity system. In this second of a 7-part series published by Utility Dive, AEE lays out strategies for achieving performance-based regulation. Previously, we covered Advanced Meters: Connectivity for the Modern Grid.

Performance-based regulation (PBR) is a regulatory framework designed to better align the financial interests and actions of regulated utilities with public interest objectives and consumer benefits. A PBR framework rewards utilities for achieving well-defined outcomes (performance metrics) as opposed to simply incentivizing capital investment (inputs), which is the primary driver today of utility revenue and profits. Regulatory reforms such as PBR have the potential to change how utilities, customers and third-party providers generate, deliver, and use energy.

AEE believes that PBR, in its various forms, can serve as a foundational regulatory framework of the electric grid of the future. Future infrastructure investments must be evaluated in light of technological innovations, and judged on the basis of the value delivered by and through those investments. 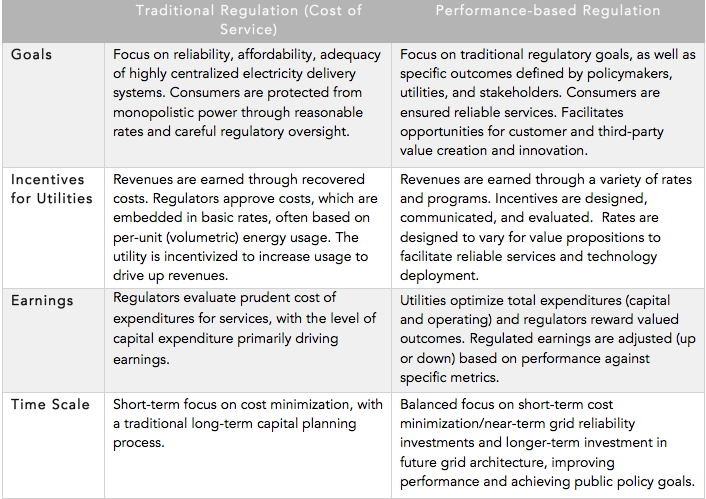 Regulatory agencies establish PBR by creating links between regulated utility financial rewards (or penalties) and desired outcomes. These outcomes are tied to an index of performance in addition to, or in place of, the cost of providing services. PBR also can include other elements of regulatory reform, such as revenue decoupling and multi-year forward-looking rate plans. Used together, these changes to cost-of-service regulation can better align regulated earnings with desired outcomes.

There is no one-size-fits-all solution for successful PBR deployment. Nevertheless, experience suggests that the following basic framework can be used to help policymakers and utilities design and implement changes that best fit their specific needs and circumstances:

PBR offers the potential to achieve policy objectives and improve public welfare while also retooling the utility business model for success in meeting those objectives.  Experience shows that, with thoughtful design processes, rewarding performance can work well. Implementing PBR in each jurisdiction needs to be considered in the context of a utility system that is becoming increasingly complex. This suggests that a move toward PBR should also involve considerations of adjustment to the regulatory process as a whole. This should include greater involvement early on by various stakeholders that will ultimately play an integral role in the utility being able to meet its performance targets.