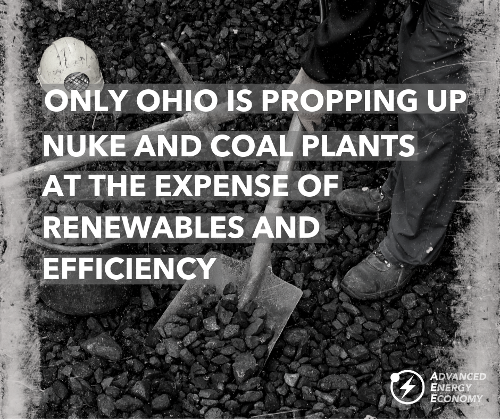 Last week, the Ohio General Assembly passed House Bill 6, a bill that provides customer-funded subsidies to uneconomic coal and nuclear power plants while gutting the state’s clean energy programs. HB 6 is the culmination of a five year assault on advanced energy in Ohio, which included two failed attempts to repeal the state’s Renewable Portfolio (RPS) and Energy Efficiency Resource Standards (EERS), a two-year freeze of those same standards, enactment of the most onerous wind siting restrictions in the nation, and more than two years of debate on how to bail out coal and nuclear plants that could not compete in the market. When Gov. Mike DeWine signed the bill almost immediately, Ohio’s march to the past was complete, making the Buckeye State stand out among its Midwest neighbors, as well as states across the country, in going backward, rather than forward, in energy policy.

This year, as in the past, Ohio was targeted by in-state and out-of-state interests determined to make it the first major state to abandon advanced energy and embrace old, inefficient legacy energy. What’s important to understand is what an outlier this action in Ohio is. Thus far in 2019, Colorado, Maine, Nevada, New Mexico, New York, and Puerto Rico have passed legislation to greatly expand renewable energy and/or act on climate in their legislative session. In numerous other states, including neighboring Indiana, efforts to artificially prop up the coal industry, have also been rejected. Rather than setter of an anti-advanced energy trend, Ohio would seem to be the last gasp of old energy in the American heartland.

To be sure, House Bill 6 is a loss for the advanced energy industry. The legislation reduces the RPS from a modest 12.5% to 8.5% by 2026, subtracts industrial energy load from the baseline (thereby reducing the total amount of renewable energy to be procured), and officially sunsets in 2026 with no requirement to maintain the 8.5% level. The final bill did include support for six solar developments that are already being built, but that is simply a matter of living up to current obligations.

While the energy efficiency language is somewhat convoluted, the bottom line is that once a benchmark of 17.5% is achieved the program ends. This could occur as early as 2021 if the Public Utilities Commission of Ohio finds that cumulative energy savings achieved by all utilities since 2009 is equal to 17.5%. Otherwise, the PUCO will set an implementation program moving forward.

While these are significant losses that threaten the 112,000 jobs in Ohio’s advanced energy industry, the bill is not the full dismantling and destruction of advanced energy that some in the Ohio General Assembly have pushed for most of the past decade. AEE, and countless other advocates in the state, successfully fought these attacks at every turn. What changed this time?

Throughout the past fights over the future of advanced energy in the state, former Gov. John Kasich, who left office at the end of 2018, tried to balance the legislative leadership’s anti-advanced energy zeal with a desire not to let Ohio look like an old-energy backwater. He went along with a two-year freeze of RPS and EERS in 2014, ostensibly so that the legislature could study the standards, gave in to reduced requirements for renewable energy built and procured in Ohio and weaker efficiency standards, and even agreed to the onerous wind setbacks. But in 2017 he vetoed an attempt to extend the freeze and vowed not to let the legislature repeal the standards altogether. In fact, in his last two years in office, Kasich came to the conclusion that the RPS and EERS were achievable and cost-effective and told the legislature he would veto any measure weakening the standards.

It was our hope that Kasich’s successor would remain a backstop against the legislative leadership’s worst impulses on energy. As part of AEE’s Gubernatorial Engagement effort in 2018, we met with the gubernatorial campaigns in Ohio, including then-candidate Mike DeWine and lieutenant governor nominee Jon Husted, and provided a roadmap for advanced energy policy to DeWine’s transition team. But after taking office, Gov. DeWine provided no such leadership. His only public statement in support of advanced energy followed House passage of HB 6 (with that version of the legislation repealing the RPS and EERS altogether), when he spoke to the need for a diverse energy portfolio with renewable energy as part of the state’s energy mix.  As HB 6 was marching forward but additional advocacy in favor of advanced energy might have protected the RPS and EERS from being gutted, Gov. DeWine was largely missing in action.

This year, the attack on the RPS and EERS was tied directly to the effort to pay for the bail-out of two of FirstEnergy Solutions’ uneconomic nuclear power plants, the Davis-Besse and Perry units. Ohio is not the only state to provide subsidies intended to keep money-losing nuclear power plants in operation, generally for their carbon benefits. New York, New Jersey, and Illinois have done so as well, though in both cases the support for nukes was paired with major commitments to expanding renewable energy and energy efficiency as well. Ohio is the only state that is propping up old nukes at the expense of new advanced energy investments, and the only one to bail out uneconomic coal plants in the same stroke, which gives the ultimate lie to the “clean energy program” the legislation was billed as initially.

The discussion of new taxpayer subsidies for FirstEnergy Solutions (FES) was not new this year. Executives have been arguing for financial assistance for the past several years, first stoking fears they would leave Ohio, then that the company would go bankrupt (which it did), and most recently that the employees at these two facilities would be laid off any day now.  This time around, FES and its allies used the dubious rationale that repealing the riders associated with the RPS and EERS would more than offset the costs of the subsidies, thereby lowering Ohioan’s overall electric bills. It was a specious argument that won the day – or at least provided cover for legislators voting for the handout.

Perhaps the biggest factor in the passage of HB 6 was the amount of money that FirstEnergy and its allies contributed to politicians in the 2018 election cycle. According to an analysis from Common Cause Ohio, FirstEnergy’s political action committee (PAC) and employees contributed over $1.2 million to legislative and statewide candidates in Ohio. Notably, the PAC contributed the maximum of $25,415 to Speaker of the House Larry Householder. This is on top of an additional $250,000 the company donated to other PACs in the state.

The fight over HB 6 may not be over.  Opponents, such as the independent power producers and natural gas industry, have indicated that they may mount a statewide referendum to repeal the bill in its entirety during the general election next November. We will know by late October whether the significant effort required to place a referendum on the ballot is successful.  If opponents are successful in gathering the required signatures, HB 6 will not take effect until after the referendum is decided.

Now that FirstEnergy has its long-awaited taxpayer subsidy – at least for now – the question for Ohio is where does energy policy go from here?

It’s worth remembering that opponents of the RPS and EERS have long argued that these technologies should compete on cost to be part of Ohio’s energy mix, but then turned around and pushed for nuclear and coal bailouts. These are also the same legislators who imposed onerous and unnecessary regulations that have crippled what was once a burgeoning wind industry in the state. It’s about time for Gov. DeWine and the legislative leadership to recommit Ohio to letting the market work.

It’s been noted that the wind setbacks blocked more than $4 billion in investment in the state and it’s not just the wind industry’s investment that Ohioans are missing out on. Between the setbacks and HB 6, Ohio lawmakers are sending a message to Fortune 500 companies that Ohio doesn’t want their investment. With over 70% of Fortune 100 companies having a renewable energy procurement goal, policy that blocks these technologies effectively tells America’s leading companies to look elsewhere to site and expand their operations. Easing these wind setbacks could restart the wind industry’s investment in Ohio. We know that when given the chance to enter the market, wind can win on cost. Leadership that claims to support the free market should ease these burdensome regulations and allow wind access to that marketplace.

Additionally, Ohio lawmakers need to reexamine the state’s short-sighted view toward energy efficiency. Reducing energy waste is a proven benefit for consumers and the electric grid. According to the American Council for an Energy Efficient Economy, Ohioans could save over $5 billion in avoided energy costs over a 10-year period. These savings mean fewer power plants that Ohio families are paying to be built – and kept in operation down the line.

Ohio needs to embrace energy efficiency, in part by finding a market-based solution. Allowing transmission and distribution utilities to invest in the infrastructure needed to facilitate efficiency investments while requiring them to provide access to energy data for consumers could help the industry to thrive in Ohio beyond the expiration of the EERS. Again, if elected officials claim they support free market principles then they should embrace policies that allow that market to work.

It’s been a long fight over Ohio’s energy future these past five years. Today, it looks like forces aligned with the past have won the day for now. But if Ohio doesn’t want to get left behind its neighbors and the rest of the country, lawmakers have to come together and enact a sound energy policy that allows 21st century advanced energy technologies to enter the game against outdated 20th century technologies. We know if that happens, advanced energy will win.