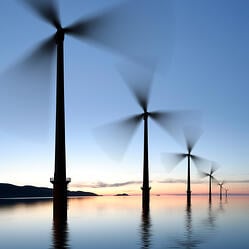 On May 16, Maryland Gov. Martin O’Malley solidified his legacy as a clean energy champion when he vetoed a bill (HB 1168) that would have effectively placed a moratorium on wind power for much of the state. AEE sent a letter to the governor last month, joining a chorus of industry advocates urging this veto action.

In a letter explaining his decision, Gov. O’Malley said that “reducing greenhouse gas emissions by shifting to clean energy will not always be easy or convenient in the short run, and it will challenge all of us to find new ways to coexist, but it is critical to sustaining the economy and the living environment of our State.” His full letter is worth a read:

I am committed to protecting Pax River because I know how critically important it is to Maryland. After careful consideration, I am vetoing this bill because (1) there are meaningful safeguards in place that render the bill unnecessary; (2) the real threat to Pax River is not an array of wind turbines on the lower Eastern Shore but rising sea levels caused by climate change; and (3) increasing renewable energy is a core strategic goal for the future security and prosperity of our State.

House Bill 1168 will have the practical effect of derailing the Great Bay Wind project, a 70 megawatt wind-powered generating system under development in Somerset County – a county that has one of the highest unemployment rates in the State. The bill would effectively kill a $200 million investment in the county, along with much-needed jobs and local tax revenue, all because of the perceived inconvenience that wind turbines pose to operations at Pax River.

Ironically, the greater inconvenient truth threatening Pax River – and the billions of dollars of economic activity generated by that facility – is climate change. To address that threat, we must encourage the development of clean renewable energy. Reducing greenhouse gas emissions by shifting to clean energy will not always be easy or convenient in the short run, and it will challenge all of us to find new ways to coexist, but it is critical to sustaining the economy and the living environment of our State.

House Bill 1168 would be detrimental to the development of the clean energy economy that Maryland seeks. The developers of the Great Bay Wind project have engaged in good faith reliance on the policies established by our federal and State legislative bodies. If this moratorium were to take effect, it would send a chilling message to clean energy investors, developers, manufacturers, construction firms, engineers, and sustainable businesses that the State can change the rules at the eleventh hour. This would make it more difficult for the State to attract new clean energy investment just as Maryland is emerging as a renewable energy leader.

For these reasons, I have today vetoed House Bill 1168.