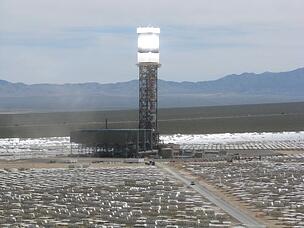 This week was full of big deals for advanced energy businesses from coast-to-coast, as well as one new state-level battle over our energy future. Here are the top five news stories of the week.

Ivanpah, Brightsource Energy’s much-anticipated and enormous solar thermal plant in the California desert delivered its first electricity to the grid this week. The three-year, $2.2 billion project has been approaching the finish line for months, and this week’s test indicates that the array is nearly ready to go online full time. Once it is, the project will send 377 megawatts of power to the grid. In the meantime, seeing the tower lit up in the desert like the lighthouse of Alexandria is a reminder of just how powerful the system is going to be.

This week Boston-based wind company First Wind announced a deal with National Grid, Northeast Utilities, and Unitil. In a deal with “plenty of winners,” the three utilities entered into 15-year contracts to supply 565 megawatts of wind power from First Wind and two other developers at an average price below that of many other sources: 8 cents per kilowatt-hour. These pacts will help finance two of the Northeast’s largest wind farms in Maine, and, as Boston Business Journals points out, lenders like to see long-term contracts. “There are not a lot of projects getting done in the wind market these days without a long-term contract,” First Wind CEO Paul Gaynor says.

3. Google makes its largest purchase of wind power to date

This week, Google announced its largest wind power purchase to date: 240 megawatts from a wind farm in Amarillo, TX, will power Google’s Mayes County, OK, data center, at least indirectly. Google is a long-time proponent of wind energy, having acquired Makani Power (a kite-based wind energy company) and invested in an offshore wind “backbone” earlier this year, and the company has committed to using renewable energy to power its data centers wherever possible.

Unfortunately, Google can’t do that here. Because Texas is separated from the power grid that serves Oklahoma, the power purchased from the Happy Hereford wind farm cannot power the data center directly. Where there’s a will, there’s a way, however, as GigaOM’s Katie Fehrenbacher explains: “Google will sell the energy into the wholesale energy market, retire the associated renewable energy credits and apply additional credits to lowering its overall carbon footprint.”

Nest already makes the one of the most exciting home efficiency products: a smart thermostat that can be controlled from anywhere. We should have realized, however, that Nest co-founder Tony Fadell, the “father of the iPod,” would want a product line that could do more than just control the temperature. The smoke detector could be Nest’s next step toward a fully networked “smart home,” built efficient and intelligent from the ground up.

Ohio Senator Bill Seitz, chair of the Public Utilities Committee in the State Senate, has filed a bill to water down that state’s energy efficiency and renewable energy standards. His bill to repeal Ohio’s renewable portfolio standard (RPS) stalled, as did every other effort to date in the nationwide campaign to roll back state RPS laws. Seitz’s new bill would cost Ohioans $3.65 billion in additional energy costs over the next dozen years, according to economic modeling from The Ohio State University’s Center for Resilience commissioned by Ohio Advanced Energy Economy, AEE’s state partner. Ohio AEE has launched a legislative campaign to defeat the bill and protect Ohio’s advanced energy future.

“These OSU findings prove the economic benefits of our state’s Renewable and Energy Efficiency Standards,” said Ted Ford, President and CEO of Ohio Advanced Energy Economy. “Ohio’s advanced energy companies are stepping forward to let the Ohio Senate know that Senator Seitz’s bill would increase energy costs, and would pull the rug out from under more than 400 Ohio companies and 25,000 employees in Ohio who are working to deliver advanced energy products and solutions today.”

Just how big is the global advanced energy industry? Find out in AEE's free report The Economics of Advanced Energy. Spoiler: it's worth more than $1.1 trillion dollars!