This week we saw reports of a U.S. “solar surge” as several major utility-scale CSP projects go online in the Southwest deserts. Renewable Energy World compares to the effort to “building a massive Hoover Dam” of solar energy, crediting a Department of Energy loan guarantee program.

Several solar PV companies were also in the news this week. SunPower is expanding manufacturing by 25% in the Philippines and has posted another profitable quarter. The company expects a revenue of more than $2.4 billion for fiscal year 2013. NRG Energy, NRG Yield, and SunPower announced this week that they are beginning commercial operations at the 250 MW California Valley Solar Ranch in San Luis Obispo County, California.

This is a far cry from earlier this year, when Greentech Media published its List of Deceased Solar Companies. Not so long ago, things were looking bad for the solar industry. It appeared that the solar bubble had popped, and many were comparing it to the dot-com bubble of the late 1990s. This week we saw Bloomberg’s analysis that the current solar rebound is “beating” the dot-com recovery, with stabilized panel prices and installations are up, “swelling” 40 percent this year.

As we’ve discussed previously on Advanced Energy Perspectives, incorporating advanced energy electricity sources means moving toward a 21st Century Electricity System. Utilities are being challenged to incorporate mechanisms like net metering into their business models. Some utilities are updating their business models: this week the Motley Fool profiled Edison International and other utilities that have placed a premium on customer-generated solar power. Considerations like these will be increasingly important as utilities and regulatory bodies move forward to create the 21st Century Electricity System.

AEE has hosted a number of CEO forums discussing exactly how businesses expect to move forward to create a 21st Century Electricity System. Download the summaries of those meetings here.

This week Oregon, Washington, California, and British Columbia announced a regional partnership to place a price on carbon called the Pacific Coast Action Plan on Climate and Energy. The three states and province will use a unified set of rules and regulations to speed adoption of advanced energy technologies. 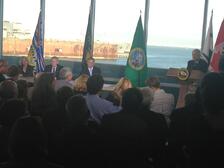 “AEE applauds the landmark Pacific Coast Action Plan on Climate and Energy signed this week by the leaders of California, Oregon, Washington and British Columbia” said Steve Chadima, senior vice president and director, California initiatives at Advanced Energy Economy. “A region-wide commitment to fairly pricing carbon and supporting low-carbon fuel standards will create a more seamless environment for businesses operating along the entire Pacific coast. This reinforces and expands on the great strides the advanced energy industries have made towards a prosperous future based on clean, secure and affordable energy.”

The announcement of this regional partnership follows up on last week’s news of an eight-state advanced vehicle coalition. State-based policy work is leading the country, which is why AEE is dedicated to advanced energy policies at the state level. Check out our comment letters to California’s governing bodies at the link below.