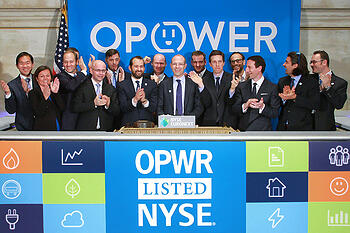 Last Friday, AEE member company Opower rang the closing bell at the New York Stock Exchange, marking the end of its first day as a publicly traded company (NYSE: OPWR). See video of the NYSE celebration here and more photos here. While a big occasion for the behavioral efficiency company, Opower’s IPO is an important moment in the transition toward a 21st century electricity system. Opower and other advanced energy companies like it are helping to change the long-held utility business model. The “energy-data nexus” is one of the big areas of opportunity for investment and innovation.

In Utility Dive, associate editor David Savenije took a deep dive into Opower’s business model, looking for the secret of the company’s success.

Founded in 2007, Opower was a startup with a simple goal: to make a better utility bill. Since then, the company’s mission, wrote Savenije, has become a “little more ambitious” – “to motivate everyone on earth to save money.” Opower uses data and behavioral sociology to encourage people to save electricity. Partnering with utilities, Opower assesses consumers’ electricity use and provides a comparison against neighbors’ use. (For more on behavioral efficiency, check out our blog post “Beyond Sweaters: Unleashing Behavioral Energy Efficiency.”)

But Savenije focuses on the way Opower has carved out a place for itself in the utility industry as it is evolving. Although encouraging consumers to consume less energy seems at odds with the traditional utility model, Opower found a way to work within the existing system – and maybe point the way forward. Opower CEO Dan Yates explains:

“Alternatively,” Yates said, “utilities can lean in and go way in on efficiency, which drives down costs to keep rates low enough that they can then reraise the rates to bring in more and more cost-effective renewables.”

What will the 21st century electricity system ultimately look like? AEE has hosted a series of roundtables with the business leaders who are building it today. Click on the button below to learn more.

On the island of Guam, advanced energy is set to provide a huge cost savings: Boeing and NRG partnered to build the Pacific island’s first solar plant. Due to the high cost of importing fuel, the new solar plant provides the lowest cost power available on Guam. The electricity will be purchased by the Guam Power Authority, and is expected to save the island $300 million in fuel costs.

This week the Wall Street Journal interviewed two representatives of America’s top employers this week—the military and Wal-Mart—on their commitments to advanced energy. Roger Natsuhara, the principal deputy assistant secretary of the Navy, discussed the Navy’s ambitious advanced energy goals, including sailing a strike group fueled by advanced biofuels by 2016. The program will help the Navy cut fuel costs and protect against volatility.

“We use about 30 million barrels of oil a year,” Natsuhara said. “When a barrel of oil went up $30, that was a billion-dollar hit to our budget we had to absorb. It's a very significant cost for us, and that happened two years in a row. From the national-security side, fuel and energy is one of our major vulnerabilities.”

At Wal-Mart, Chairman Michael Duke discussed incorporating advanced energy into day-to-day business at the world’s largest retailer. Last year, Wal-Mart was the top company in terms of solar capacity with more than 89 MW of installed capacity at its supply centers and retail locations. “It’s about running a better company,” Duke said. “And along the way, we’ve saved hundreds of millions of dollars.”