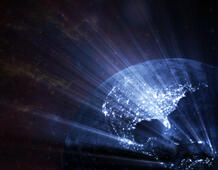 Computing giant Microsoft announced on Monday that it entered into a 20-year wind power purchase agreement with RES Americas, an AEE member company. The 55-turbine, 110MW, $200 million Keechi project is expected to come online by summer 2015. With this agreement, Microsoft joins Apple, Walmart, and Google as a top-tier company with significant investment in advanced energy.

“It’s a sign of the times that the price point for these renewable projects is quite attractive to them,” Rob Morgan, chief development officer for RES Americas, which develops wind and solar projects, told AP.

Writing for The Guardian, Ucilia Wang expands investments in advanced energy are making increasingly “good business sense,” especially with the average long-term price for wind power dropping from $70 per MW-hour in 2009 to $40 per MW-hour in 2012, according to Lawrence Livermore National Laboratory. And not just in wind energy. According to the Solar Means Businessreport from the Solar Energy Industries Association, the top 25 private solar-system owners have installed more than 445MW of solar capacity in the United States, up 48% from last year.

Microsoft’s strategy to pay for advanced energy is interesting: the company has levied an internal carbon tax on its different divisions. This internal levy has a number of goals, including incentivizing energy efficiency across divisions. Some of that money collected internally (up to $10 million over the policy’s first year) will be used to fund the purchase of power from the Keechi project. To the extent that Microsoft’s financing of a Texas wind farm represents the start of an advanced energy rivalry with Google, however, the software giant has a long way to go to catch up with that company’s investments to date, which top $1 billion.

Following up on last week’s reports of a “solar surge” in the Southwest, this week Arizona’s Solana solar plant went online. The system, which is currently the nation’s largest, spans three square miles of desert and uses a solar thermal system of curved mirrors to generate electricity. Arizona Public Service (APS) has a 30-year purchase agreement with the facility, which also includes energy storage capacity.

"The benefit of this facility with the energy storage is this facility can keep operating at full power levels through our peak periods even on into the nighttime hours," said Brad Albert, APS general manager of resource management.

Finally, the Marine Corps is working on what it calls the Marine Austere Patrolling System (MAPS), which includes a built-in solar panel for recharging batteries and a water filtration system. It’s all about reducing the weight of gear a Marine needs to carry into the field – currently, as much as 100 pounds of batteries to power electronic equipment and two or more eight-pound gallons of water for a four-day mission. By contrast, the solar panel weighs just 13 pounds and can recharge batteries in the course of the mission. The concept isn’t new to the U.S. Armed Forces: the Army has been using solar battery recharging equipment for several years.