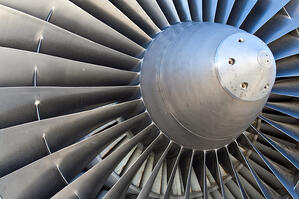 Some hardcore technology in this week’s advanced energy news. Energy giant and AEE member General Electric is expanding its advanced energy product line to include fuel cells. Google is looking to shrink inverters. And utility San Diego Gas & Electric is getting ready to launch drones to check on transmission lines.

Katie Fehrenbacher, writing for GigaOM, reports that GE has developed a new process to create the core of a fuel cell by using a sprayed-on ceramic coating. All fuel cells use some sort of catalyst to generate electricity. The catalyst coats metal sheets in a stack inside the cell. As air flows over the stacks, hydrogen (typically from natural gas) and oxygen interact with the catalytic coating, generating electricity. GE has developed a way to spray its ceramic coating directly onto the metal stacks, which is cheaper than the typical “sintering” method, which fuses the coating by heat or pressure. GE estimates that the technique, which was originally developed to coat jet engine components, will reduce the cost of fuel cell production.

The company plans to pair the fuel cell with a Jenbacher gas engine – another GE product – to create a “hybrid” fuel cell that operates at 65% efficiency. GE has created a dedicated business unit operating as an internal “start-up” and opening a plant in New York to bring the new fuel cell product to market as early as 2017. 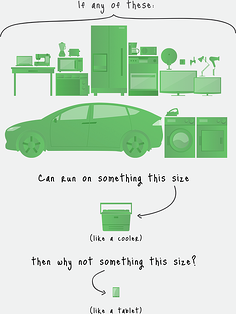 Meanwhile, Google issued a $1 million “Little Box” challenge to shrink inverters – which convert DC current generated by solar panels and wind turbines and stored by batteries into AC current for use by electronic devices or the grid – from picnic cooler size to laptop size, a reduction of 90 percent. Greentech Media’s MJ Shiao predicts this will require “revolutionary” new materials and designs. But smaller inverters would have a vast range of applications. These, as Google wrote in its blog post announcing the contest, would enable “low-cost microgrids in remote parts of the world. Or allow you to keep the lights on during a blackout via your electric car’s battery. Or enable advances we haven’t even thought of yet.”

Launching a technology challenge in power electronics might seem an odd role for the Internet and smartphone operating system giant but, as we have seen, Google has been expanding its role in advanced energy. Google has made big investments in solar and wind projects to power its data centers, and is a big backer of the Atlantic Wind Connection, a transmission backbone for offshore wind. Recently Google has gone deeper in energy technology, hiring electronics engineers for their “Bottom Up Grid” project, which promises to “fundamentally change the world of power.” In charge is Arun Majumdar, former head of the ARPA-E “transformational energy technologies” program for the Department of Energy.

Finally: drones. The Federal Aviation Administration granted approval for San Diego Gas & Electric to use drones to inspect a stretch of transmission line in a rural corner of eastern San Diego County. SDG&E has “hopes of proving that flying robots are safe and effective tools” for utility applications.

As Greentech Media points out, drones could be described as a “smart grid technology,” allowing for better and faster information about everything from outages to downed power lines to weather patterns. We may not get flying cars within our lifetime, but a flying smart grid may be just over the horizon.