NEWS: Cities Going All In; Water Heaters Storing Energy for the Grid

This week, the news is about cities taking the helm on advanced energy market creation, with Philadelphia joining scores of other cities in taking a pledge for advanced energy—though one columnist thinks the media attention lavished on 100% renewable statements is “mindless cheerleading.” And, like many weeks this year, storage is taking center stage as utilities deploy all kinds of technologies, from EV batteries to hot water heaters, to hold energy until it’s needed.

Philadelphia Mayor Jim Kenney has become the 100th mayor to sign on to the Mayors for 100% Clean Energy pledge. Although the effort is spearheaded by the Sierra Club in direct response to the United States’ announced withdrawal from the Paris Accords, Philly has long been choosing and investing in advanced energy technologies. The city has already installed solar panels at various Philadelphia Water Department facilities, and AEE member Veolia also runs one of the nation’s most efficient combined heat and power plants, the Philadelphia Steam Plant, which cogenerates heat and power for universities, hospitals, and commercial buildings in downtown Philly. The public transit system, SEPTA, recently announced plans to install solar panels at four bus and rail shops across the city totaling 3.1 MW.

(SEPTA’s sustainability initiative is called SEP-TAINABLE 2020. It seeks to increase efficiency and decrease emissions, which is all well and good, but the name is incredible.) 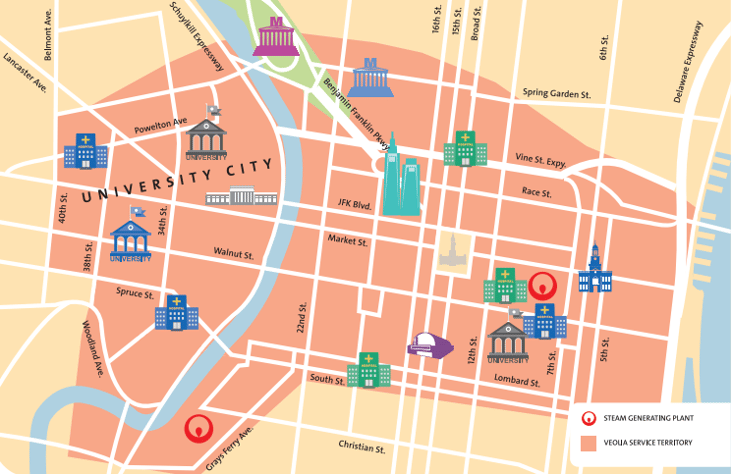 “Transitioning to a just energy system that is clean and affordable for all will slow these changes [in climate] and make Philadelphia a better place for current residents and future generations,” Mayor Kenney said.

“There is an economic case to be made, I believe, for businesses to look at renewable energies and look at energy efficiencies,” said Mike DiBerardinis, the city’s managing director. “It’s good business now. I think we want to play on that in the plan.”

Philadelphia is just one of many. In April we reported that Chicago aims to power its more than 900 municipal buildings with renewable energy, which will provide long-term cost savings. In March, more than 30 cities across the United States, including New York, Chicago, and Los Angeles, went EV shopping, asking automakers to assess the cost and logistics for fleets of EVs for cities. In a guest post earlier this year, AEE member Veolia discussed how two cities and a Canadian province are benefitting from waste-to-energy technologies.

Not everyone is impressed.  Sam Brooks argues (also in Greentech Media this week), city leadership is “not actually happening.”

Brooks, former director of the D.C. government’s energy division, points out that cities have little grid-level jurisdictional authority. State-level public utility commissions do the bulk of regulating energy infrastructure, and “even with respect to the critical issue of building codes,” Brooks writes, “mandates are frequently determined by counties, states, and the International Code Council.”

“It turns out that when cities claim reductions in greenhouse gases, they’re usually taking credit for things they didn’t do,” writes Brooks. He goes on to outline the difficulty in creating real change like investing in energy efficiency for municipal buildings that are “technically” being powered by renewable energy, thanks to renewable energy credits.

Nevertheless, cities committing to advanced energy on an ambitious scale reflect the growing demand for these technologies. One instance this week was in Austin, Texas, where the municipal utility is deploying large-scale batteries to be paired with solar generation. Austin Energy has a goal of 10 MW of distributed storage and 55% renewable energy by 2025.

Here’s a graphic showing how it will all work together:

The program is a pilot project, but it will be deployed on the grid immediately, serving customers with solar-plus-storage as soon as it’s installed.

Meanwhile, PG&E is partnering with BMW to prove that EVs can be flexible storage for the grid and several utilities are realizing the storage capabilities of grid-integrated water heaters. Earlier this month, Utility Dive reported on how Hawaii, Massachusetts, Maryland, and Nevada are creating growing markets for energy storage. It’s no surprise, then, that energy storage is having another record-breaking year.

Keep up to date with all the advanced energy news that’s fit for pixels with AEE Weekly, our free weekly newsletter: