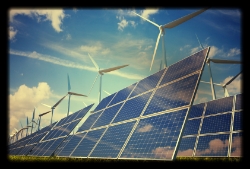 At the Edison Electric Institute’s annual convention this week, Warren Buffett briefly forgot how many billions of dollars his investment firm, Berkshire Hathaway, has invested in solar and wind projects. As Bloomberg reports, Buffett “had to rely on a deputy, Greg Abel, to remind him just how much they’d committed.” To date, that number rests at $15 billion. But, “without missing a beat,” Bloomberg reports, “Buffett responded: ‘There’s another $15 billion ready to go, as far as I’m concerned.’” You go, Warren!

Berkshire Hathaway has a history of investment in advanced energy, and he’s not the only one. USA Today ran a piece on “Why Buffett, Apple, Google love solar power.” Between the success of Ivanpah in the Mojave Desert and a dramatic decline of solar prices, the solar market in particular (and advanced energy in general) is ripe for growth.

And why not? AEE recently released a report on 40 advanced energy technologies that reduce greenhouse gas emissions and represent a huge economic opportunity, as EPA goes about regulating carbon emissions from the electric power sector. Get the report by clicking below.

Google also made headlines this week with plans to produce tools for utilities. According to Bloomberg, Google is “in the early stages” of creating software and hardware to manage grid infrastructure and power lines. The team leading the effort is being run by Arun Majumbdar, former head of ARPA-E and vice president of Google’s energy unit.

Greentech Media dug a little deeper into what Google’s plans might actually be, publishing a “rundown of some of its [renewable] energy and energy management efforts underway to date,” including more than $1 billion in investment in solar and wind projects and infrastructure and the company’s role as a stakeholder in the Atlantic Wind Connection, the so-called “backbone” of offshore wind. Greentech Media also points out Google’s smart grid capacity from Google Maps and its partnership with GE’s Smallworld management software. Is this the answer to Utility Dive’s question from January, “Is Google becoming an energy company?”

Late last month Google also said that the company is using “machine learning” to optimize energy use in their global data centers. Using over five years’ worth of data, Google engineer Timothy Gao created a machine learning program to predict, with incredible accuracy, expected power usage efficiency at Google’s data centers at any given time. Google can use the technology to determine how best to increase data center energy efficiency and which sites would benefit most from incorporation of advanced energy measures such as on-campus renewable energy and fuel cells.

It’s not just Google using computer smarts for the benefit of advanced energy. This week, IBM announced that it has been using machine learning to get the most out of advanced energy technologies with its project Watt-sun (not to be confused with Watson, IBM’s artificial intelligence engine that famously beat Jeopardy! champion Ken Jennings). Watt-sun created a platform that combines forecasting models from a multitude of organizations, both private and public. Watt-sun then provides the data—and a lot of it—for current environmental conditions.

The last word for this week goes to The Archimedes, a small-scale wind turbine built for residential and commercial use by a Dutch tech firm. Although it operates on the same principles as traditional wind turbines, its unique screw-like design allows the turbine to capture wind coming from multiple directions.

“With regular turbines, efficiency may sometimes drop depending on the angle of wind,” says Marinus Mieremet, the company’s co-founder and CTO in an interview with the Washington Post. “But the way ours is designed, it’s able to catch the wind head-on, whatever direction it blows, by automatically adjusting for the optimal wind position, sort of like a weather vane.”

It doesn’t hurt that they look pretty cool, too.