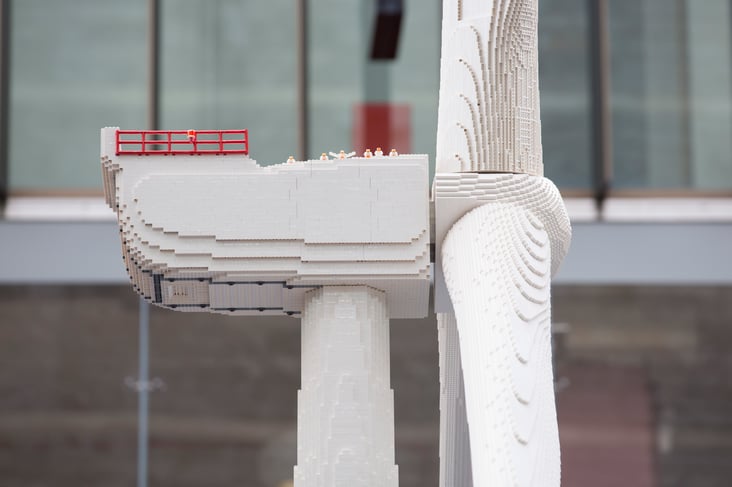 This week, we bring you stories of advanced energy chosen by industries you might not expect, generation-other-than-solar-plus-storage, and, as always, AEE members leading the way. Legos, cereal, and batteries backing up power plants: just another average week in the advanced energy industry.

In 2016, we released a report noting that 71 companies in the Fortune 100 and 215 of the Fortune 500 had made commitments to choose advanced energy. We are seeing the fruits of those choices, both from those companies and others, every day. Goldman Sachs Group, which has been a major investor in advanced energy projects for years, announced that it would become a direct buyer of advanced energy to power the company’s own operational demand. The investment bank is entering into a power purchase agreement (PPA) for 68 MW of electricity from a wind project outside of Scranton, Pa., that will come online in 2019.

“This will cover our Americas load,” said Cindy Quan, global head of the environmental, social and governance team in Goldman’s corporate services and real estate group, in an interview with Bloomberg. “Our operations are primarily offices and data centers.”

The Wall Street giant has a goal of purchasing 100% of its electricity from renewable energy sources by 2020. Prior to this deal, Goldman had mostly been relying on renewable energy credits (RECs) purchased from other projects. That said, “Goldman won’t just be in the renewables market for its own needs,” writes Liz Hoffman of the Wall Street Journal (subscription required). “The firm’s commodities arm has been building a business to connect corporate buyers of electricity with developers.”

Also entering into a wind PPA this week is cereal maker General Mills, which will buy 100 MW of wind power from a 150 MW wind farm in Concho County, Texas. The remaining 50 MW will be purchased by another GM—General Motors.

Meanwhile, Danish toy giant LEGO has reached its goal of being 100% powered by renewable generation three years ahead of schedule. Thanks to major investments in offshore wind, the company reached its goal as construction completed on the Burbo Bank offshore wind farm, a 259 MW facility off the coast of Ireland, of which LEGO owns 25%. The company also owns stakes in several other wind farms, including 31% of the Borkum Riggrund 1 offshore farm in Germany.

“We intend to continue investing in renewable energy to help create a better future for the builders of tomorrow,” LEGO CEO Bali Padda said.

To celebrate the achievement, the company built a giant wind turbine… out of LEGO bricks. 146,000 of them. According to The Independent, the structure broke the Guinness World Records title for largest LEGO brick wind turbine, which is a thing that apparently existed already. If you want a shot at that record, you may want to practice by building your own renewable energy LEGO structure, and LEGO has just the kit for that.

Finally, you’ve heard of solar-plus-storage, how about offshore-wind-plus-storage? AEE member DONG Energy announced plans this week to launch a battery solution at Burbo Bank offshore wind farm, the very same wind farm that brought LEGO over the 100% renewable energy threshold. The battery system will be able to store 2 MW, which will allow more effective frequency support.

Meanwhile, another AEE member, GE, announced that it can now “put battery storage on any of its power plants,” as reported by Greentech Media. GE, already an energy generation powerhouse, has announced that the company can layer batteries on top of existing GE steam and gas turbines, and will soon be able to do the same for solar, wind, and hydroelectric generators. GE developed the hybrid plant technology in response to an emergency. Southern California Edison shut down the Aliso Canyon natural gas storage facility after detecting a methane leak. The resulting shortage pushed SCE and GE to develop and deploy a natural-gas-plus-storage peaker plant in April.

“Aliso Canyon gave us a tailwind to push this faster. It allowed us to fast-track it,” Eric Gebhardt, vice president of product management at GE Energy Connections, said in an interview with Greentech Media. “We’ve been really satisfied with the technology.”

In 2016 Corporate Advanced Energy Commitments, AEE reports that 71 Fortune 100 companies have set renewable energy or sustainability targets. Download that report, and a report on how states can capitalize on that trend.