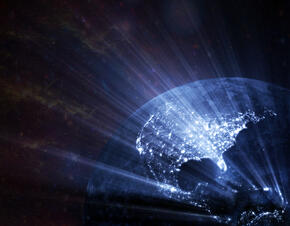 Earlier this month, four former EPA administrators for Republican presidents wrote an op-ed for the New York Times that made what they called the “Republican case for climate action.” Serving under Presidents Nixon, Reagan, and both Presidents Bush, they wrote, “we held fast to common-sense conservative principles — protecting the health of the American people, working with the best technology available and trusting in the innovation of American business and in the market to find the best solutions for the least cost.” Investment in advanced energy, they wrote, is “inarguably the path we must follow to ensure a strong economy along with a livable climate.”

But recently, we’ve been seeing more explicit calls for advanced energy from the right. Ed Schafer, former Republican governor of North Dakota, wrote a piece for the Atlantic calling for a conservative approach to energy and environment innovation.

“Environmental and energy issues have become synonymous with big government and even bigger economic burdens,” wrote Schafer. “But…they don’t have to be. Spurring entrepreneurism and innovation can create stronger policy for America – an approach that weans us from the one-size-fits all way of doing things.”

Arizona, a bastion of libertarian conservatism, boasts the nation’s second largest solar market. The Arizona Corporation Commission is weighing proposals from Arizona Public Service (APS), the state’s largest utility, to cut the value of rooftop solar for residential customers by more than half. (Public utility commissions in conservative states like Idaho and Louisiana have rejected similar requests from their utilities.)

“Republicans want the freedom to make the best choice and the competition to drive down rates,” Goldwater said in an interview with the Arizona Republic. “It’s crucial that we don’t let solar energy — and all its advantages and benefits it provides us — be pushed aside by those wanting to limit energy choice. That’s not the Republican way and it’s not the American way.”

In Georgia earlier this year, it was the state’s Tea Party that rallied to demand solar leasing. Under a law dating from 1973, only utilities could sell electricity directly to customers, preemptively cutting solar leasing systems out of the Georgia market. “We need to do everything we can to encourage renewable resources,” said Republican state Sen. Buddy Carter. “But I see it more as a private rights issue. I don’t like the government telling you what you can or cannot do with your property.”

The action in Georgia got attention down under, where a parallel is seen in the state of West Australia. There, a move by the conservative state government to reduce the value of rooftop solar was met by a revolt by legislators of the government’s own party, due to the popularity of solar among constituents.

Just as support for advanced energy does not split on party lines, neither does opposition. Cape Wind has faced opposition from everyone from Robert F. Kennedy, Jr. to William Koch in its divisive history of more than a decade. Republicans are generally more supportive of nuclear power than Democrats, while Democrats have been more slower to welcome the natural gas boom than Republicans. On the other hand, even Congress, whose members haven’t been able to agree on a federal budget since April 2009, find that they can all agree on hydropower. Perhaps there is hope for bipartisanship yet.

In other news this week, SolarCity purchased Paramount Solar for about $120 million to boost its homeowner market share and Pattern Energy, a wind company, announced plans to go public. And Elon Musk revealed his vision of the Hyperloop, a solar-powered transportation method that would travel from LA to San Francisco in a half hour.