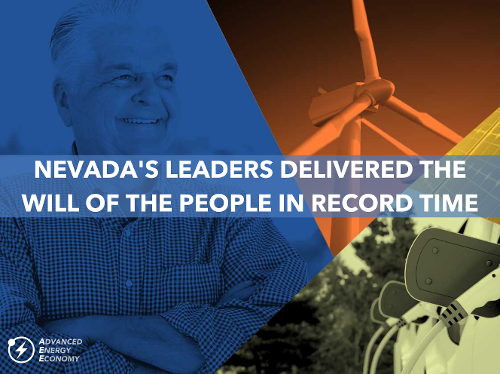 Nevada scored a major win for advanced energy last week, when Governor Steve Sisolak signed a new, stronger clean energy standard into law. SB 358, sponsored by Sen. Chris Brooks, doubles the state’s Renewable Portfolio Standard (RPS), to 50% by the year 2030. Passing both houses of the legislature without a single no vote, the RPS legislation was the latest – and biggest – step toward Nevada becoming an advanced energy leader nationally. It was also a source of satisfaction for AEE and member companies involved in our Gubernatorial Engagement work in the Silver State last year.It had been more than a decade since Nevada last increased its renewable energy standard, and this RPS increase was fully two years in the making. In 2017, then-Assemblyman Brooks sponsored legislation to increase the state’s RPS to 40% by 2030. The bill passed the legislature last year, along with a slew of other pro-advanced energy bills. Then-Governor Brian Sandoval signed nine of those bills, but vetoed the RPS measure, saying he preferred to deal with any RPS increase in the context of an “energy choice” referendum then on its way to the ballot.

That veto only served to energize renewable energy supporters, however, spurring them to reach even higher. They put their own question on the 2018 ballot, this one calling for a boost of the RPS to 50% by 2030, toward a goal of 100% clean energy by 2050.

At the same time, AEE launched its Gubernatorial Engagement program. In Nevada, along with eight other states, AEE and member companies worked to educate candidates and build relationships so that the incoming governors would be informed about the role of advanced energy in economic development in their states.

When Nevadans took to the ballot box last fall, they elected a number of candidates, including Governor Sisolak, who ran on the promise of a clean energy future. Though voters rejected the energy choice question, they passed the 50% RPS measure, but it required a second vote, in 2020, to become part of the state’s constitution.

Now, there’s no need for another vote to get a higher RPS. With strong ties to the administration, AEE worked with Nevada’s leaders to deliver the will of the people in record time – with the newly elected Governor signing a bill that passed the Nevada Legislature unanimously.

Leaders from both sides of the aisle came together to overwhelmingly support advanced energy, and it’s easy to see why. Investing in this fast-growing industry creates jobs, diversifies the state’s economy, and delivers savings to consumers. The state has become a national leader in advanced energy job growth, adding 8,000 jobs last year alone, due in part to the Tesla battery Gigafactory. Nevada is also blessed with unparalleled solar and geothermal resources, making advanced energy technologies a no-brainer for meeting the state’s energy needs as well as growing the economy.

SB 358 marks a foundational step to ensure that Nevada’s energy needs are met with advanced energy resources. It will also be a boon for the economy and the advanced energy industry in the state, generating $1.5 billion in new investments while creating some 11,000 new jobs, adding to the 32,000 Nevadans already working in the industry. Indeed, SB 358 is a step toward expanding advanced energy market opportunity in Nevada by over $7 billion, based on AEE estimates.