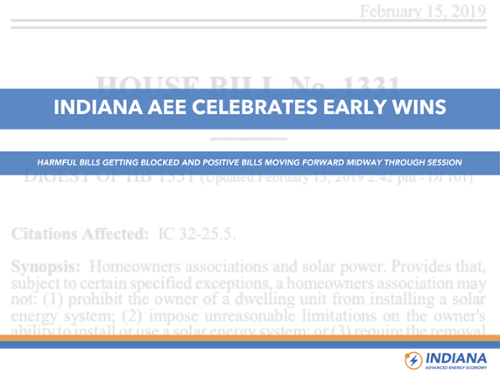 The Indiana General Assembly has officially hit the halfway mark for the 2019 legislative session. With a part-time legislature, odd-numbered years are considered “long sessions,” ending no later than April 29 and with passing a biennial budget the only statutory duty. So far, AEE has worked to support legislation to move the market forward for advanced energy while trying to stop legislation that would go the other way. While advanced energy has historically faced barriers to deployment in the Hoosier State, momentum is building, with Northern Indiana Public Service Co. (NIPSCO) announcing its intent to close all existing coal operations by 2028 and invest in wind, solar, storage, and demand-side resources to save ratepayers $4 billion. Will Indiana legislators get on board the advanced energy bandwagon? Here is our halftime report on where key issues and policies stand.

For Indiana AEE, first order of business was to deal with a couple of pieces of legislation that either explicitly or implicitly sought to slow down or stop wind energy development in the state.

The most onerous of the bills was HB 1027, introduced by Rep. Tom Saunders (R-Lewisville). This bill sought criminal penalties for any public official that does not recuse himself from a vote or discussion where the official has a financial interest in a wind farm development. AEE actively opposed this bill, and discussed our concerns with committee leadership, particularly the problems of singling out one industry for criminal penalties and the radical nature of imposing a criminal penalty for voting on an issue. After expressing our concern, Chairman Dennis Zent (R-Angola) agreed not to hear the bill, and it is now considered dead for the legislative session.

Similar to HB 1027, SB 270 would make locally elected officials disqualified from participating in a vote if said official has financial interest in the outcome of the decision. Though wind is not singled out, this bill can impact wind development. As companies are developing projects across rural areas in Indiana, commissioners and other officials representing those areas happen to own land within the footprint of wind projects. The bill moved out of committee, but was amended on the Senate floor, with AEE partnering with numerous groups to make needed changes. These included issues related to the definition of direct/indirect costs, limiting the conflicts of interest to the jurisdiction officials represent, and defining “relatives.” The bill passed the full Senate by a vote of 40-0, but we will seek some additional changes in the House, where the bill has a more favorable sponsor.

On a more positive note, SB 535 , which passed the Senate by a vote of 39-8, would repeal the authority of a municipality to exercise powers outside of its corporate boundaries. While not specific to wind, this legislation would keep municipalities from standing in the way of wind development in the two-mile “buffer zone” outside city or town limits. This bill was supported by Farm Bureau with Indiana AEE also in support. Other groups that came out in favor include the Association of Counties, the Indiana Chamber of Commerce, and the Indiana Manufacturers Association.

Things have gotten complicated on HB 1331, a bill to keep homeowners associations (HOA) from banning solar installations. This would only apply to rules and covenants adopted or amended after June 30, 2019 – older rules would remain in place. In addition to Indiana AEE testifying in favor, there was broad support from Citizens Action Coalition, Indiana Conservative Alliance for Energy, and some local citizens. However, the Homebuilders Association opposed the bill, and were successful in adding “poison pill” amendments that would allow HOAs to prevent solar installations in sight of the street and rights of way. The bill author went along with the amendment to help move it along, with the understanding that the Senate will work to get the bill back to its original purpose. The Senate Utility Committee Chairman, who is running for the Mayor of Indianapolis and wants to show his support for advanced energy, has become a cosponsor of the bill. The bill passed the House by a vote of 90-6.

Meanwhile, HB 1470, on utility transmission improvements, has garnered a lot of attention in the first half of session. This legislation seeks to update the tracker statute related to utility investments in transmission, distribution, and storage system improvements. Trackers are adjustment mechanisms for utilities to file rate changes that are outside the original rate case. Today, utilities are locked into investment plans for seven years. The bill aims to create more flexibility for utilities to update plans. Though some have raised cost concerns, the bill offers an opportunity for increased investment in advanced energy, particularly storage and advanced metering infrastructure, which are not adequately addressed in plans currently in force. The bill passed the full House by a vote of 74-19 and now awaits consideration in the Senate, where prospects look good.

Finally, Indiana AEE helped to pull the plug on HB 1468, legislation that would require the Office of the Utility Consumer Counselor (OUCC) to utilize Indiana Utility Regulatory Commission (IURC) staff instead of hiring staff of its own, with exceptions requiring approval by the Governor and Budget Agency. Apparently intended as retribution for its past action in rate cases, the bill would effectively neuter the agency as an advocate for consumers. While it originally appeared that this bill was not going to be considered at all, it was scheduled for a hearing late in the first half of session. After Indiana AEE had conversations with the House Utilities Committee chairman, the bill was removed from the calendar just minutes before the hearing was to begin. Without a committee hearing in the first half, the bill should be dead for the session, but we will keep a close watch to make sure it stays dead.

For Indiana AEE, it was a successful first half of session, with some harmful bills blocked and legislation that would allow for some advanced energy advancements moving ahead. We look forward to a successful second half and opening more opportunities as utilities and the Indiana Utility Regulatory Commission look for more cost-effective advanced energy options for Indiana.